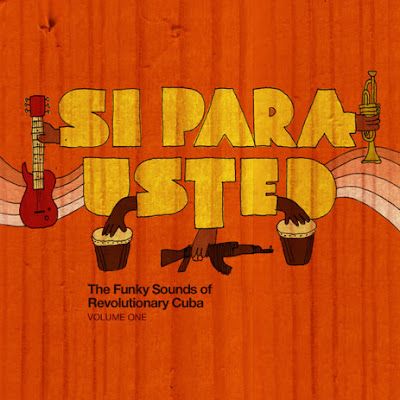 Dig out your disco shoes, your hammer-and-sickle, and put on your funk face--you may need them all once you get a load of “Si, Para Usted: The Funky Sounds of Revolutionary Cuba, Vol. 1.”

The recording is a 2007 release organized by Canadian DJ Dan Zacks, who hosts the celebrated Waxing Deep radio show from Fredericton, New Brunswick. Waxing Deep specializes in resurrecting previously lost vinyl from around the world, and thankfully for world music fans, the live and archived shows are available online, or via podcast. In an interview with the Tucson Citizen, Zacks explains how he got turned on to Cuba’s eclectic funk scene from the 1970s:

I spent a number of years selling records professionally in Montreal, which happens to be one of the few locales outside of Cuba and former Soviet bloc countries where you can find Cuban records (in part because of the close relations between Castro and (former Canadian Prime Minister Pierre) Trudeau). While sourcing Quebecois music, I would sometimes stumble across the odd Cuban release, usually folkloric music, but on rare occasions something funky by Juan Pablo Torres or Groupo Monumental. These records were my first introduction to the sound on "Si, Para Usted," and I was quickly seduced by their unlikely provenance--communist funk?--and their dance floor potential.

For all of modern Cuba’s many controversies, limitations and inspirations, no one disputes that in the 1970s and 80s, Cuba’s revolutionary government invested heavily in music and in musicians, even as it strictly controlled distribution through the state-owned record company EGREM. Politics were out-of-bounds, but mining Cuba’s vast musical heritage was encouraged. Many talented musicians were offered free musical education and given opportunities to record and compose outside of pre-revolutionary class and racial barriers, and outside of purely market-defined standards of musical value. 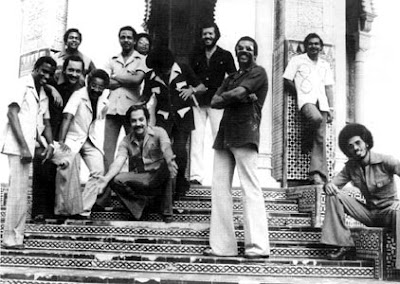 Thus the anomaly pointed out by Pitchfork Media: “a repressive communist government that fostered a vibrant, influential, and essential musical output…In the 1960s and 70s, Cuban music played just as big a role in the development of popular music styles in Central and West Africa as anything coming out of the U.S. or Europe.” According to Calabash Music, “an unprecedented combination of socialism and artistic freedom flourished during the mid-years of Castro’s Cuba, enabling musicians to create an innovative body of music based on traditional styles.” All Music Guide adds that Cuba "subsidized music schools and paid all proficient musicians a stable salary, then watched as they demonstrated their new smarts on releases for EGREM, Cuba's sole record label."

Who knew that Cuba, in all its Castro-acted iron-fistedness, was a hotbed of funkadelic inventiveness? Si, Para Usted documents a thriving community of musicians who merged their country's renowned rhythmic verve with the piquant progressive-rock, psychedelic and funk elements that were infiltrating bands
worldwide during the '70s… These influences penetrated the Communist cultural gatekeepers and seeped into Cuba's stream of (altered) consciousness… think of Santana jamming with Fela Kuti's Africa 70 and Os Mutantes in an equatorial opium den. The 17 songs on Si, Para Usted coruscate, radiate and oscillate beyond the Buena Vista Social Club's templates while still acknowledging their importance. Si, Para Usted is a helluva rumba in the jungle.

Many of the groups represented will be familiar to Cuban music fans (e.g. Los Van Van, Irakere, Juan Pablo Torres, Orchestra Riverside), but Waxing Deep has dug out some choice tracks from these superstars that illustrate the era’s heavy bass-oriented funk mixed with son rhythms. Pitchfork Media describes Irakere’s pounding “Bacalao Con Pan” as “an astounding slab of grinding, psychedelic funk that tosses freak-out guitars with bright horns and even a bit of salsa piano,” and notes “the stabbing horns, wicked fuzz guitar, dubby effects and funk drums” on Juan Pablo Torres’s “Son a Propulsion.” 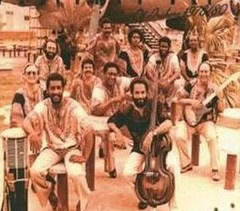 You can check out song samples for yourself on the Waxing Deep website.

While listeners outside of Cuba may categorize this music as funk, Dan Zacks points out that the category isn’t a relevant one inside Cuba:

I should take this opportunity to clarify that there is no "Cuban funk" in Cuba. You can't go to Havana and ask someone selling music for "funk Cubano"; he or she would have no idea what you were talking about. What people outside of Cuba refer to as Cuban funk is definitely funky, but in Cuba it has no special designation. It's merely "música popular." The tracks on the compilation are pop from the '70s and early '80s based on traditional forms but influenced by foreign artists like Earth, Wind & Fire and…Isaac Hayes's "Theme From Shaft." It's funky as anything, and like so many collectors and DJs, I'm happy to refer to it as Cuban funk, but in Cuba, it's just another son.

This recording truly captures a bygone era of Cuban music. Dan Zacks describes going to Havana last year to do research for the CD. Local musicians were playing Buena Vista Social Club chestnuts for tourists, while Reggaeton and salsa from Miami and New York boomed out of homes to the exclusion of home-brewed music forms. Meanwhile “many of the musicians on the compilation left Cuba in the '90s (or earlier)--Juan Pablo Torres, Ricardo Eddy Martinez, Jorge Soler (of Grupo Los Yoyi), Arturo Sandoval, etc.--and the conditions that created the compilation's music no longer exist.” He adds that while all of the music is licensed through EGREM, the CD is not being distributed inside of Cuba, as “virtually no Cuban could afford even its wholesale price."

Let's hope there's a volume 2 to continue publicizing this important and groovy music.