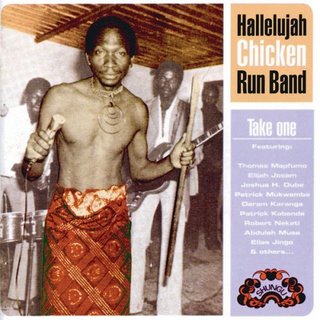 One of my all-time favorite recordings was released this summer: a classic re-issue of early-70s tunes from The Hallelujah Chicken Run Band, presented in a CD titled "Take One."

These tracks represent the recording debut of Zimbabwe’s musical and revolutionary hero Thomas Mapfumo, and they are a revelation that have lost none of their rhythmic freshness and unique groove over the years. This is inspiring, dynamite stuff musically and historically.

The tale of the band is legendary: founded during the brutal, racist colonial regime of Rhodesia, the group formed when the white-owned Mangura Copper Mine hired them as a pick-up group to perform for exhausted miners at the end of their shifts. Inspired by Mapfumo and guitarist Joshua Hlomayi Dube, the group proceeded to create a dynamic new musical form that was captured on tape by Teal Records.

The recordings feature a driving rhythm section anchored by crisp, intricately-picked, multiple electric guitars. Often working in 6/8 time, the melodies are all layered over beautiful harmonic vocals and Stax-style horn blasts. The 2006 release is re-mixed to a warm and enticing glow.

The vibe on these recordings evolved into Mapfumo’s heralded Chimurenga music, the soundtrack for the Zimbabwean Revolution (since betrayed, of course, despite Mapfumo’s efforts from exile). Mapfumo wrote himself into history when he continued to compose music during the late-1970s while imprisoned by the Rhodesian government for his revolutionary and anti-racist activism.

I’ve been planning to post about these recordings for weeks, but each time I listen to the tracks, I hear more details that I want to add. This is a supreme recording---listen to it and you’ll understand.

Needless to say, the CD has received widespread attention among African music fans throughout the world—I think it’s a major addition to the growing body of re-released 1970s classics from Africa. For example, from All Music Guide:


The founding fathers of Zimpop are presented here in all of their original glory, with the added bonus of some much-needed remastering. While most of Zimbabwe was still singing Western pop covers with a bit of rhumba mixed in, the Hallelujah Chicken Run Band were changing the sound of the country. Under the guidance of guitarist Joshua Hlomayi Dube and singer Thomas Mapfumo (in his earliest years), the band was replacing pop songs with traditional ideas — the guitar being given a staccato sound to mimic aspects of the mbira, and Mapfumo's vocals mimicking its sounds as well. At the same time, lyrics were at least occasionally made political and rebellious, and sung in Shona, a major issue given the political climate of Rhodesia at the time. The work is always excellent, and the band has far more coherence and ability than one might expect from a ragtag group of performers, barkeeps, part-time farmers, and the like.

All About Jazz reports on the origins of the band’s name:


As the story goes, two members of the group found day jobs working at a local chicken run. Upon hearing this, the mine's boss man, one Mr. Walker, shouted “Hallelujah!” and proceeded to christen the band with a name that was destined to become an acronym. Several months later, after he cut the musicians' salaries, a young Thomas Mapfumo went to complain and was fired on the spot, but thankfully Mapfumo still had the day job with the chickens. Or so the story goes. And so began the ups and downs of the HCRB.

Public Radio International’s review of the recording also has an update on Thomas Mapfumo:


In Zimbabwe, if you criticize President Robert Mugabe publicly, you could end up in a whole lot of trouble. Such is the case of singer Thomas Mapfumo. So strong were his critiques of Mugabe, that he left Zimbabwe in fear for his personal security. Mapfumo now lives in Oregon -- and he continues to rail against Mugabe's un-democratic ways. It's hard to fathom that -- at one point -- Mapfumo and Mugabe saw the world through the same revolutionary glasses. A newly released collection of Mapfumo's early songs takes us back to that point in history.

Also check out the blog post from Candie Pop (“some of the most infectious rhythms and melodies I’ve heard in a longtime”). You can hear song samples for yourself on the emusic website.