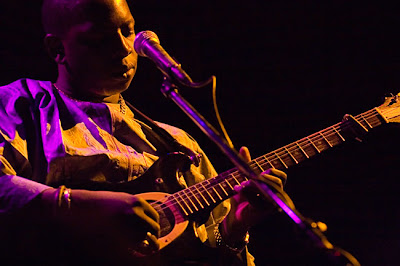 
It just doesn't get any better than this - sitting in the open air under the beautiful California sky watching a fantastic double-bill of African music, with Vieux Farka Toure opening for Toumani Diabate. What an exciting and memorable show!

Vieux, the immensely talented son of the late Malian musical giant Ali Farka Toure, put on a mesmerizing performance of electric guitar-based blues and African rock. African music lovers delighted in the 2006 release of Vieux's excellent debut album, but as Banning Eyre (senior editor of afropop.org) explains, "as great as the recording is, it in no way prepared me for the charisma, chops, and overall showmanship of the young man himself." 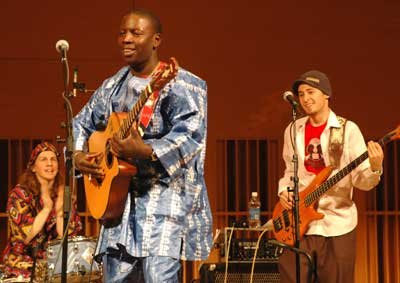 All Music Guide explains, Vieux's music "is such a triumph in every way that the question isn't whether he will carry on the legacy, but rather just how much further he will take it." As a special treat, the legendary guitarist Mama Sissoko was part of Vieux's band, adding wisdom and experience (and another wickedly talented guitar player) to Vieux's youthful exuberance.

Toumani Diabate and his band were no less impressive, blending tradition and modernity in a captivating big band sound. Toumani is not only one of the world's very greatest kora players, but is also a tireless innovator and an extremely entertaining showman. At one point, he gave a kora lesson to the audience, showing how to play the bassline and melody while improvising, all at the same time.

When I first heard a CD of Toumani playing the kora, I wrongly thought it was several different musicians, not figuring it was just one lone master doing three things at once. And with his 10 other supremely talented band-members, Toumani created a veritable wall of sounds and rythms that had the crowd dancing and smiling ear to ear.

The pairing of these two great artists is especially fitting, given Toumani's groundbreaking collaboration with Vieux's father Ali before his death, as well as Toumani's contributions to Vieux's own album. Toumani even referred to Vieux as his own "son," who was continuing Mali's musical traditions and innovations into the next generation. Apparently, Ali Farka
Toure didn't even want his son Vieux to be a musician, and it was none other than Toumani Diabate who persuaded Ali otherwise. I'm sure thankful for that.