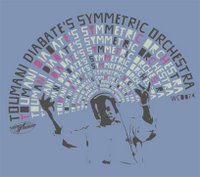 The Malian kora wizard Toumani Diabate released a new album last week that is already making big waves. The so-called "Jimi Hendrix of the kora," he is widely considered one of the world's greatest players of the instrument. His funky new big band, The Symmetric Orchestra, has put a fresh groove into the ancient griot tradition.

The new album, Boulevard De L’Independence is receiving critical adoration and is turning heads worldwide for its mix of old and new. It was recorded at the Hotel Mande in Bamako at the same time as "In The Heart of the Moon," the 2005 Grammy Award winning collaboration with Ali Farka Toure. The album features blistering kora on top of a funky groove that includes former James Brown horn section leader Pee Wee Ellis.

There is a nice review of the new album today on the Fly Global Culture and Music website ("I want to show how far I can push the improvisation, I am for sheer technical brilliance").

Fly also has a front-page feature and interview with Toumani Diabate where he discusses his current blend of modern music, kora and ancient traditions---here is a taste:

“Where is Toumani?” vocalist Soumaila Kanoute sings every Friday night in a small bar in Bamako called Hogon. “Toumani has arrived!” he announces as an unassuming man, carrying a four-foot high 21-stringed harp-lute known as a kora, takes centre stage. And every Friday night the expectant crowd erupts in song and dance to the African star’s latest project: Toumani Diabate’s Symmetric Orchestra.

It appears that the CD and bonus DVD are available only in England as of this date. You can order "Boulevard De L'Independence" and listen to song samples here.