Orchestra Baobab Still Has It 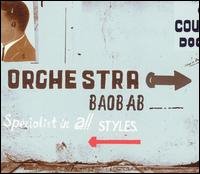 I recently saw Senegalese masters Orchestra Baobab at The Birchmere in Arlington, Virginia, just outside of Washington, DC. As you would expect, they were incredible: super-tight arrangements, dynamic Afro-Cuban groove, sharp stage presence, and with their unique and intoxicating flair. No one does it better. It was a special opportunity for African music fans in the DC area, although anyone familiar with their Nonesuch release "Specialists In All Styles" wouldn't be surprised---their set was note-for-note organized around the CD arrangements. Very impressive.

Here is the Allmusic.com review of "Specialists in All Styles:"

Putting a classic band together 15 years after their demise can be a recipe
for disaster. In this case, though, World Circuit head Nick Gold has definitely
done the world a favor. Orchestra Baobab might be best known for their classic
Pirate's Choice, but this disc is every bit the equal — it's most certainly not
Buena Vista Baobab Club.

For someone who hadn't touched a guitar in years, after
becoming a lawyer in his native Togo, Barthelemy Attisso is all over this
record, offering beautiful, inventive solos and playing whose fluidity,
especially on "Gnawe" and "Dee Moo Wor," is wonderfully atmospheric.

As any fan would expect, the Cuban influence remains very strong,
but the Wolf roots are also strong, especially in the voice of
young singer Assane Mboup. Guest turns
from Ibrahim Ferrer and co-producer Youssou N'Dour on "Homage a Tonton Ferrer" — a remake of "Utru Horas," their biggest song — aren't going to hurt the album's visibility. But ultimately it's the band themselves who carry the record, playing better than ever (not only the superb Attisso, but also saxman IssaCissokho). Back in fine style, indeed."