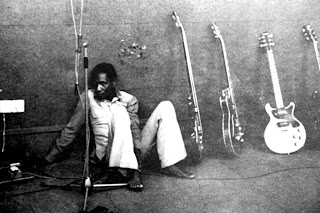 Last year, Ghanain jazz-funk pioneer Ebo Taylor put out his first recording in more than 30 years, Love and Death, a remake of the1980 release "Conflict."  That was great news for afrobeat fans around the world, as Taylor was a key figure in the fervent West African music scene in the early 1970s.  Originally trained as a jazz musician, he was part of highlife bands the Stargazers and the Broadway Dance Band in the 1950s.  He led the Black Star Highlife Band in the 1960s before collaborating on some of the signature afrofunk tracks of the new era.  As a guitarist, composer, arranger, bandleader and producer he helped bridge the gap between traditional Ghanain forms, jazz and funk, working with Fela Kuti, the Apagaya Show Band, the Uhuru Dance Orchestra and others. 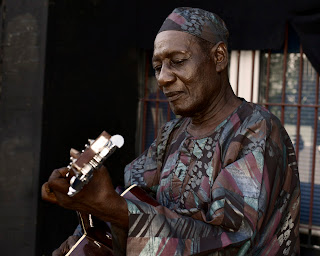 The Afrobeat Blog republished a recent interview with Taylor from the record collecting site Digging 4 Gold that includes this quote, on how Taylor and Fela came to view highlife as dated:


“We were, all the time, discussing ways to develop our African music to enable us to get global attention. The only way to do it was to get into funk or jazz… that’s what we were… we were, primarily, jazz musicians. In London, we use play jazz clubs. I used to jam with Fela… Any time we got together, the black musicians in London, we were thinking of home and how to develop our own things instead of playing jazz or instead of playing Highlife, which we thought was foxtrot or like quickstep.” 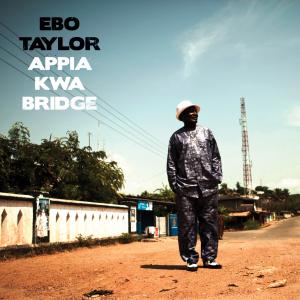 With Taylor's new release Appia Kwa Bridge from Strut Records, he has come full circle, and now leads a new generation of afrobeat musicians from Berlin-based Afrobeat Academy.  The result are some rich, pounding grooves that make your heart beat faster and your feet move quicker.  The recordings also feature the one and only Tony Allen in a guest spot on drums, as well as original Africa 70 guitarist Oghene Kologbo.

This is great stuff.  The recording is scheduled for release on March 19th, and there is a tour planned starting in May 2012.  You can listen to two of the new tracks on Strut's website (click on the playlist link).  Strut also offers up additional background info on the the recording:


“I wanted to go back to a highlife feeling with this album,” explains Ebo Taylor. “The songs are very personal and it is an important part of my music to keep alive many traditional Fante songs, war chants and children’s rhymes.”

‘Appia Kwa Bridge’, released this April, is a strident return from the Ghanaian highlife guitar legend. Featuring six new compositions, his sound is more dense and tightly locked than ever with Berlin-based musicians Afrobeat Academy, a rock solid unit since regular touring worldwide following his ‘Love And Death’ album in 2010, including a string of dates for WOMAD. Jochen Stroh works his analogue magic once more from his base at Berlin’s Lovelite Studios.

The album covers a variety of themes dear to Taylor. The title track references a small bridge in Ebo’s hometown of Saltpond on the Cape Coast: “it is a tiny bridge but a place known in the town where people meet, where lovers get together.” The firing, rousing ‘Ayesama’, first demo-ed during the ‘Love And Death’ sessions, is a Fante war cry, a taunt – “what’s your mother’s name?”; ‘Nsu Na Kwan’, based on a Fante proverb, asks “Which is older – the river or the old road” with the sub-text to respect your elders and the brilliant ‘Abonsam’ carries the message that Abonsam (The Devil) is responsible for evil in the world and that we should follow the Christian message.

Elsewhere, the album features a new version of highlife anthem, ‘Yaa Amponsah’, first recorded during the ‘20s by Jacob Sam’s Sam’s Trio before becoming a popular standard in Ghana, and a cover of an original track from Taylor’s time with Apagya Show Band during the ’70s, ‘Serwa Brakatu’, re-titled here as ‘Kruman Dey’. The closer, the acoustic ‘Barrima’, is a poignant tribute to Taylor’s first wife and one true love who sadly passed away during Summer 2011. “Ebo wrote the song following her passing and recorded this in one take during our last day in the studio,” reflects bandleader Ben Abarbanel-Wolff. “He was very emotional.”