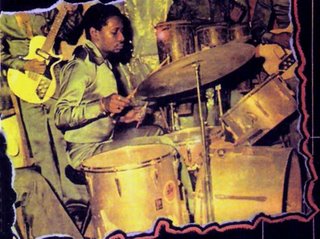 As eloquently stated on NaijaJams.com:
“One man is typically credited for the… African music into a form known as Afrobeat- Fela Anikulapo Kuti… But Fela cannot be single-handedly credited with its creation. An integral part of the equation was self-taught drummer Tony Allen who brought us those unmistakable rhythms that Afrobeat is known for today… Fela once reportedly claimed that without Tony Allen, there would be no Afrobeat. A strong statement, but it only demonstrates what an integral part Tony Allen was in the creation of the sound.”

Tony Oladipo Allen was a cofounder of Afrobeat, as Fela’s drummer and longtime musical director. After a career in jazz and highlife Allen developed a novel style to compliment Fela’s new African groove. Tony combined the traditional Ibo/Yoruba & Ghanaian music of his parents with deconstructed highlife, jazz, and James Brown soul.

Allen recounts how Fela & he wrote in 1970, “Fela used to write out the parts for all the musicians in the band (Africa '70). I was the only one who originated the music I played. Fela would ask what type of rhythm I wanted to play. It was complicated at first, too much, but I advised him to keep it simple. It is hard work playing African music. It sounds simple, but it’s not, especially drumming…it is easier for drummers to play Highlife. But you can tell a good drummer because we… have four limbs… and they are… playing different things… the patterns don’t just come from Yoruba… [but] other parts of Nigeria & Africa.”(Graeme Ewens, “Africa O-Ye!”, 1991)

Allen describes his playing as “one person playing like four." Imagine taking 4 ensemble tribal drum parts and assigning one to each limb, but thinking of the result as a linear pattern, not separate pieces. There is no ‘backbeat’- the propulsion stems from polyrhythms between drum-kit, percussion, rhythm guitars & bass. But unlike funk, instruments play interlocking complimentary patterns (not unison).

Like funk or jazz, Afrobeat is a genre rather than a single groove. The foundation of Afrobeat drumming is the hihat (adapted by Allen from jazz hihat lessons by Max Roach in a drum magazine) [Tony Allen: "As Long as I'm Alive I Will Never Bore You"]. As in a jazz rides, the pattern is not static, polyrhythmic variance adds interest, creating tension & release. Tony explains, "First the legs got to get walking. My hi-hat does not stay closed, to me that is not good drumming…. it will become very boring" ("Tony Allen Returns Home Cooking" by Tunde Okoli). The bass drum often plays a repeating 16th pattern which is answered by rudiment-based comping on the snare. While the drum-kit parts interlock with the band, they also have internal logic & are fully formed call & response master-grooves.

Tony says, "Afrobeat is serious dance music. I play like a machine or a loop. I make it steady for the audience to let them find something in the drumming." Allen adds, "I don't have limits of beat creations. What the music brings that's what I give back. The music is coming from the drums." (Excerpted from a Jazz Fest interview by Tony Montague on Straight.com) .