Surfacing mysteriously after over 30 years, the video footage of Fela and African 70’s set at the Berlin Jazz Festival (Berliner Jazztage) in 1978 is a true gift to lovers of Fela and Afrobeat, marking the best quality video/audio and musical performance of Fela to date. Seek it on Youtube if you must, but true fans will want to obtain a DVD copy to witness this event in its full splendor uncompressed, large, and with full sonic spectrum (hook this puppy through your sound system). Plus you will see the songs unbroken, with Fela’s informative introductions:


1978 was a year full of historically significant events in the turbulent life of Fela Anikulapo Kuti. Fela was not performing locally, the Nigerian government had banned Fela shows for a year, and neighboring Ghana kicked him out after protestors adopted Fela’s “Zombie” in anti-government protests.

February, in anti-colonial cultural protest, he married 27 wives (his “Queens”) in Lagos. He and his republic staged a 78-day sit-in protest in the Decca Record company Lagos headquarters for breach of contract and royalty disagreements (Fela’s show in Berlin is the only reason they left). In April, Fela’s mother died of injuries she sustained during a government raid on Fela’s Kalakuta compound.

In November (or September according to some sources), Fela & Afrika 70 headlined the Berlin Jazz Festival, while back home in Nigeria, government forces demolished the Kalakuta compound. Shortly thereafter, Afrika 70 disbanded, after Fela’s longtime musical director/drummer Tony Allen quit, reportedly due to pay, autonomy, and respect issues (for example, Fela decided to use the Berlin Jazz money to fund his presidential campaign). Fela’s baritone saxophonist, Lenkan Animashaun (a.k.a. Baba Ani) assumed the duties of musical director of Fela's new Egypt 80 band.

Berlin Jazz 1978 was a landmark concert for Fela: a rare, high-quality, professionally recorded document of Afrika 70’s final show! The venue is in the round, and although there are few camera angles, close-ups and smart democratic focus on most band members is satisfying (though Allen is not covered quite as much as his importance commands). Songs are true Afrobeat length (approximately 15 minutes each). Solos are as strong as ever, this is Afrika 70 at their apex.

Musically, the band is tight, vocals are solidly accurate, and the groove is a stunning demonstration of the highest level of musicianship, control, and stage presence. The band is animated, engaging, and amusing (guitarists Kologbo & Shegun, and the percussionist Abayomi brothers are particularly entertaining). Dynamics are extreme and hits are thrillingly precise. The polyrhythmic percussion propels with bubbling tension and release, and contains the sonic interest of woody melodic gbedu (akuba).
In light of the band's brilliance and infectious energy, it is puzzling and vexing that the live audience does not react much. They do not stand, nor dance, mostly sitting watching, stroking their beards, exclaiming, "hmmm, indeed." Odd.

The video and audio quality is the best I have ever seen for a Fela concert. The mix is remarkable for the era and enormity of the band. The video is crisp and well lit, with white stage lights always on. Not particularly mood-inducing, but perfect to witness Afrika 70's band members playing, who are too often buried in the murky darkness. The band is perfectly tailored in bright yellow, with the chorus members donning complimentary purple. Fela is stunning in a yellow/dark blue brocaded jumpsuit.

Quincy Joppes sums it up in his introduction: "We present to you today, the greatest thing that ever came out of Africa... Fela and the Afrika 70... an experience of real African music...you will see something very original politically, religiously, and musically.”

He introduces the members of Afrika 70:

1. V.I.P (Vagabonds In Power)
Fela introduces V.I.P., “Look at me as something new, something you have never seen before...99.9% of the information you get about Africa in wrong...V.I.P.means ‘Very Important Personality’...but you see, when these VIP get too rich, they do not want to see the ordinary man on the street who is poor.” Fela chastises audience members for talking while he is introducing the song.

2. Power Show
Introduction- “I am going to stand for presidency of my country next year... Somebody ask me, ‘how can a musician be a president’, and I ask him how can a lawyer be a politician?... The big man, like to use power to strike you down... the African concept of music, where jazz originated...” This performance is quite a rollicking rock version.

3. Pansa Pansa
Introduction- “You see when you are a revolutionary and you talk the truth... people will come and slap you down... then you talk again, they put you in jail... and when you are very strong, and you talk again, they may kill you, they may even burn your house down.... African people are afraid for life... they say, ‘do not talk again’.... but they no hear at all, they going to hear Pansa Pansa (more and more...) because the truth can never die”. Pansa Pansa is a wicked fast Afrobeat groove. The bass guitar is a little low in the mix here- crank your bass settings for maximum funk. Watch for the percussionist helping the guitarist adjust his settings mid song! Pansa Pansa recounts some of Fela’s revolutionary hits, then directs some audience participation. Look for Fela’s organ solo surrounded by his percussionists and guitarists striking photogenic poses around him.

If you purchase the DVD, you get the bonus of 2 CD’s or Fela’s best: 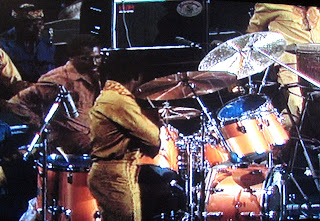