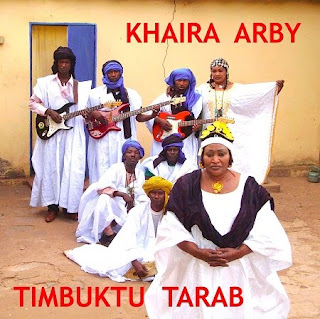 “I am the ambassador for Timbuktu” reveals Khaira Arby on an NPR interview. A relative star by her teenage years, Khaira Arby is a modern force for the bestowment of Malian traditional music with a modern sensibility. Inspired and mentored by her cousin Ali Farka Toure, whom Khaira sang with in her twenties, Khaira is advancing the reach of Malian music, as well as evolving the fusion of Malian and American music. An unreleased recording from the era of their collaboration in the mid eighties can be found at the amazing blog site http://blogs.voanews.com/african-music-treasures/music/, along with a wealth of other fantastic recordings.


Timbuktu Tarab, is Khaira Arby’s most recent and international album.
Released in August of 2010, it features a host of fine musicians, naturally including her band, which is comprised of fairly young and even some familial talent from Timbuktu who play with a fiery urgency. Instruments featured include the modern electric band outfit, but also features a nice mix of ngoni, njarka, sokou, and calabash. The album finds Khaira singing in several languages indigenous to this Saharan region of Africa: Songhai, Tamaschek, Bambara, and Arabic. 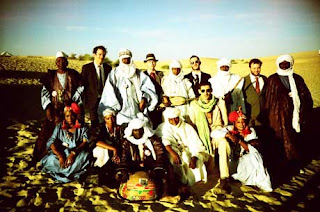 Although modern character and inevitably, production are evident throughout, of special significance is the song Tarab. After a profound musical encounter on a rooftop in Timbuktu, the band Sway Machine and Khaira Arby have made a bridge of communality, resulting in rewarding proliferation. Sway Machine is fronted by New York’s Jeremiah Lockwood, who has explored the musical revelations of his Jewish background, of blues, and other music in Balkan Beat Box. His partners include musicians from Barbez, Arcade Fire, and Antibalas.

Khaira Arby and Sway Machinery have appeared at the Festival of the Desert 2010, and have appeared together in a live setting several times.


Timbuktu Tarab, is quite effectively a great album. Go check it out and be prepared to experience the sweet riffs and vocal command of Tarab. This song just Kicks It!