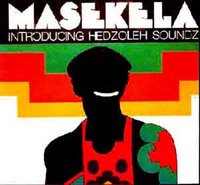 The 1973 album “Introducing Hedzoleh Soundz,” by Ghana’s Hedzoleh Soundz with South African trumpetist, Hugh Masekela is simply stunning- arguably the greatest African-Jazz fusion album of all time, and certainly Masekela’s most outstanding release. The musicianship & creativity on these precious cuts are matchless. All but 2 of 8 tunes are written by Hedzoleh (one is by Masekela in HS style, one is traditional)- and therein lies the album’s brilliance. So don’t be fooled by the title, this is Hedzoleh’s album with guest Masekela.

Hedzoleh (“freedom”) Soundz was formed in Accra, Ghana in the late 1960’s. Leader Stanley Todd assembled a monster ensemble of musicians from the Ghana Arts Council, intending to form a new Afro-Rock group that would be more traditional & African in sound, and hopefully surpass Osibisa in popularity (alas it was not to be). Their original songs were based upon traditional Akan & Ewe music, and employed dark, organic sounding African-made drums instead of modern western congas/drum-kit. One of their greatest hits was a Liberian sea shanty/Palm Wine song (Rekpete). Hedzoleh’s traditional percussion-heavy instrumentation included: 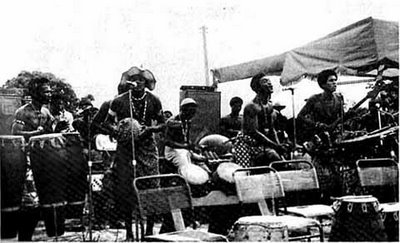 Interestingly, Hugh Masekela was introduced to Hedzoleh by none other than Fela Kuti. Masekela worked with a primordial version of Hedzoleh as early as 1967 as evidenced by his powerful (but more jazz-heavy) performance at the

Masekela described his elation working with Hedzoleh Soundz: "I found a certain vitality in Afrobeat. Playing with… [Hedzoleh Soundz] was like being on a big fat cloud. You couldn't fall off."

Amazingly, no record company has ever bought the rights to release “Introducing Hedzoleh Soundz” on CD, so your best bet is to find it on LP via a google search. Fortunately there always seems to be a couple available (many unopened). One track from “Introducing Hedzoleh Soundz”, entitled "Languta" IS available on the Masekela compilation, "Still Grazing". Check it out!

Masekela toured Africa & the US with Hedzoleh, recording 2 other (Masekela-written/weaker) albums :
1. "I am Not Afraid" (1974)- the full album is only on LP, but a CD compilation, "Stimela" has three tracks (African Secret Society, Been Such A Long Time Gone, & Stimela )
2. The Boy’s Doing It (1975)- includes other musicians like OJ Ekemode & Guy Warren-available on CD.

p.s.- As a side note, Osibisa alumnus Mac Tontoh, formed a group very similar to Hedzoleh in 2001: "Kete Warriors". A CD & VHS tape exist of this interesting project.