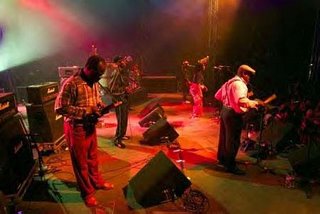 11:30, Friday night. The oppressive, tropical heat permeates the inky darkness hiding the seething mass of humanity packed into the sprawling club. The heavy air is charged with anticipation, as the drenched crowd cranes to see the preparations on the darkened stage, a brief lull between the swells of African music washing over the audience. The opening act, “Chopteeth” has incited the onlookers with a propulsive set of Afrobeat and Highlife, and now the throng are preparing for full-on dance riot.

Suddenly, the dull glow from the stage bursts into a blinding radiance, as the lights are raised and Congolese ensemble “Konono N°1” takes the stage. Large African agogo bells sound a polyrhythmic call. A cycle of warm buzzing amplified thumb-piano tones is joined by others, forming an interweaving line of syncopated melodies, evoking ancient, sacred, organic soukous. This bubbling, rasping ostinato is accompanied by bush Congo drums, and a homemade iron hi-hat & snare drum. Each enchanting composition drones on for a quarter-hour plus, heightening its effect. Songs melt into each other without breaks in between. Sick lamellophone licks dominate the night. The audience rocks intensely to the pulsing sonic waves, a sweaty, bobbing sea of ecstatic, tranced-out zombies hypnotized by the deep Congo vibrations.

Many visitors to Africa can relate to this experience, but satisfyingly, this scene in fact occurred in Washington DC, at the Black Cat (sans a/c), July 21. Konono N°1 is a band from Kinshasa, Democratic Republic of Congo. Formed by musician and truck-driver Mawangu Mingiedi, in the late 1970’s, Konono N°1 play electrified Zombo (or Bazombo) music. The Zombo live along border of Congo & Angola, and have an economy based upon farming & hunting.

Pressured by years of Belgian occupation, Mingiedi, and some fellow émigrés relocated to the city (Kinshasa). Wanting to maintain & propagate his Zombo music & honor the ancestors, he formed Konono N°1. The foundation of the band’s sound is 3 likembé (or “sanza”) thumb pianos [bass, tenor, and solo/treble]. Sanza (with Congo drums) were traditionally employed by the Zombo to honor and invoke the ancestors. 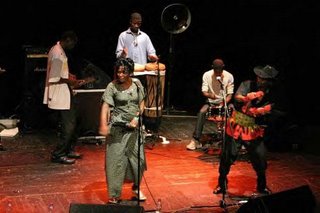 This system, while effective, added unintended & inexorable distortion to the sound. While this might vex Western ears, such buzz is actually sought in many African musical contexts (for example the spider egg-sack membranes stretched over holes in balaphone resonators, or the bottle-caps affixed to mbira resonators). Embracing this aberration, Mingiedi cultivated a distorted modern mutant breed of Zombo roots music, that has been erroneously compared to myriad punk and electronica experimental artists.

Konono N°1’s compositions are modal explorations rather than keyed chord progressions. Songs have distinctive bass-guitar-like lines played on the bass likembé (played through a bass amp for touring purposes). The tenor & solo likembé may be likened to distorted finger-picked guitar lines (played through modern guitar amps). The 16th note clave-accented hi-hat & snare drum parts suggest the influence of modern soukous music, while the Congo drums (tam tam) and agogo bells play traditional-sounding melodic rhythms floating between subdivisions of 4 and 6. And the music is amplified LOUDLY! All is played with the impeccable discipline and authority of village elders.

Seek Konono N°1, they deserve your attention. Their live show is a multi-sensory wonder to behold.