The Tightest Rhythm Section in History? 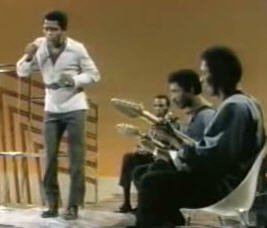 The AfroFunk Music Forum is returning in force after a brief summer break! Stay tuned for regular doses of the latest in music news and links about afrobeat, funk and any other groovy info.

To kick-start things, check out this video clip of JB on mainstream US television delivering Mother Popcorn, circa 1968: holy crap, how can this band be so tight?!?

I especially like how the horn section becomes a collective percussion or rhythm instrument, with their staccato, repeated choruses. Fela frequently used the same technique to dynamic effect.

The percussive, rhythmic horn section is a musical linkage to big band swing era when bands led by Louis Armstrong, Duke Ellington, Benny Goodman, Dizzy Gillespie and so many others built an entirely new music around the (pre-electric) giant horn section, keeping the rhythm going in large dance halls. The horn sections back then were the analog Marshall stacks of their day (more on that later).

While the later bop jazz innovators broke down that collective horn section vibe, it definitely still packed a wallop by the time JB hit the scene, and still does so today—not least of all in the many bands participating in the afrobeat revival movement that is lighting up dance floors worldwide. Viva Horns!

And do check out the blistering sax solo at the end by nobody other than the amazing Maceo Parker---wow!