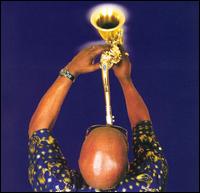 Cameroon’s sax superstar Manu Dibango released a new album this week which compiles his top hits over a 50 year career pumping out funky Afro Jazz. He helped define African Jazz, and the new collection is a nice overview of his solo music, including both the big hits and some less well-known gems.

Manu Dibango was a regular performer with Fela Kuti, The Fania All-Stars, Sly and Robbie and many other crucial artists, and his influence has been widespread. Honking Mephis-style horns, driving percussion and catchy hooks are hallmarks of Manu Dibango’s popular and evocative style.

The fair trade music company Calabash Music has a website that includes free one-minute samples of all the songs on the new album, which is titled The Very Best of Manu Dibango. Check it out and consider purchasing the CD from Calabash. Calabash includes an overview of the new CD:


Mixing Stax & Tamla styles with that unrelenting African percussion, and adding riffs ala Parker, Junior Walker and King Curtis to the mix, this collection begins in 1967, exposing some rare cuts from Dibango, focusing on the master musician's period of creative heights and finishes with the brand new storming dance floor filler DJ Flex mix of “Soul Makossa.”

All Music Guide also has a nice summary of Manu Dibango’s career and discography, including this exerpt:


Dibango is Cameroon's, and perhaps Africa's, best-known jazz saxophonist. Starting in the 1950s, he became a globe-trotting musician, living and performing in France, Belgium, Jamaica, Zaire, and Cote d'Ivoire, as well as in Cameroon. Dibango's output has been prodigious and multi-faceted. In addition to being one of the leading jazz saxophonists of his generation, Dibango has also run nightclubs, directed orchestras, and started one of the first African musical journals. A later release, Polysonik — featuring English rapper MC Mello, Cameroonian singer Charlotte M'Bango leading a choral section, and sampled pygmy flutes — shows that Dibango is continuing to flourish and expand in challenging new directions.

My band Chopteeth occasionally performs Manu Dibango’s Wakafrika, which is definitely a titanic tune. He's a favorite, and I'm sure you'll appreciate the music.