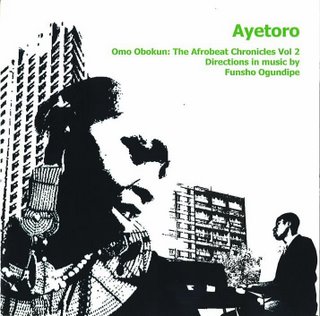 By Robert Fox
Nigerian Afrobeat veteran Funsho Ogundipe has a brand new CD on the streets by his group Ayetoro. Titled “Ayetoro: Omo Obokun, The Afrobeat Chronicles Vol 2, Directions in Music By Funsho Ogundipe,” the recordings follow up Ogundipe’s four previous albums with some heavyweight jazz and afrobeat, along with an range of energetic, experimental post-bop and funk. This is an outstanding effort that I’ve really enjoyed listening to.

Funsho Ogundipe began playing piano at age 17 and was a regular at Fela Kuti’s club The Shrine. He performed with Fela in 1988 and formed Ayetoro in 1996 after a successful career in law and business.

For years I’ve thought that the Ayetoro track “Revenge of the Flying Monkeys” was on the short list of the greatest post-Fela afrobeat songs ever written—and that’s before you even consider the genius of the title, which has also inspired a blog of the same name about African politics and culture. “Revenge” is the anchor track of Ayetoro’s 2005, “The Afrobeat Chronicles, Vol 1,” and it also appears on the definitive anthology of modern Afrobeat, “Nu Afrobeat Experience.” Ogundipe reprises the track on the new CD in a newly arranged version that builds on the dynamic impact of the original.

The new CD bears the clear influence of Fela Kuti and classic Afrobeat, and it further extends the direction of the music towards jazz and experimental grooves. Ogundipe told the BBC that Miles Davis and Duke Ellington were his primary musical inspirations, along with Fela Kuti, and you can definitely hear the influence of some of the 1970s Miles electric groups, as well as Herbie Hancock’s solo work of the same era. Duke Ellington’s imprint is reflected in Ogundipe’s thoughtful arrangements and broad range of tonal interests.

Tracks like "Pepple Street Blues," "Highlife No. 2" and "Song For Jenny" establish stripped-down afrobeat and funk as the core of Ogundipe’s music. They are anchored by rock-solid bass lines, active percussion and clever sax phrasing, and the songs get your attention with complex and often unexpected interaction between parts.
On other tracks such as "Two In One (Les Ibeji)" and "Omo Obokun," Ogundipe presents engaging songs which are more free form sonic landscapes than afrobeat, tunes that might be at home on an album by John Zorn’s Masada project. “Open Your Eyes…And Your Ears” also challenges listeners with some very funky post-bop jazz horn and keyboards over a deep, dub-inflected bass line. This is great stuff.

But to my ears, the standout track is "Mr. Xyz," with its loping, beautiful bass line, blistering sax solos, and powerful, memorably arranged horn choruses. It’s a stirring and unique joint—check it out for yourself and buy the CD here.

You can also hear one-minute samples of all the tracks on the CD here, or check out Ayetoro’s My Space site or website for more information.