Celebration In The Land!: New Live Album by Orchestra Baobab 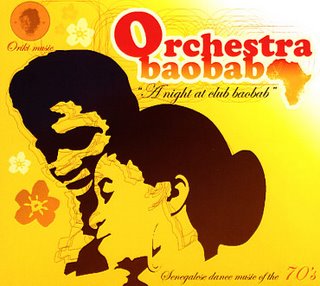 These are good times for fans of Senegal’s Orchestra Baobab. In the last few years, they’ve reissued their stupendous 1982 collection "Pirate's Choice," followed by "Specialists In All Styles," which catapulted the band to international stardom. "Specialists In All Styles," an instant classic, was produced by Youssou N'Dour and included Ibrahim Ferrer from the Buena Vista Social Club.

Since then, they’ve toured the world to great acclaim with a rejuvenated band (as reviewed in The Afrofunk Forum), and have achieved long-overdue recognition for their unique blend of Afro-Cuban rhythms and brilliant musical virtuosity. They are perhaps my favorite band currently performing—these guys really set the standard.

But here’s the best part: Orchestra Baobab has just released a live CD that captures the band at it’s peak moments in the 1970s, when they led the music scene in Senegal and laid down some epic tracks with a super-smoove groove and a visionary sense of arrangement.

Titled “A Night At Club Baobab,” this new recording is a revelation, and includes alternate arrangements of OB classics such as "Jiin Ma Jiin Ma" and "On Verra Ca," as well as incredible live renditions of previously unreleased songs including "Kelen Ati Leen," "Liti Liti" and "Saf Mana Dem." As you might expect, guitar genius Barthelemy Attisso is often featured, and sets a creative standard that’s hard to match, with his alternatively hypnotic/blistering leads.

Most of the tracks are good sound quality considering (unlike other live OB releases to date) and are certainly among their best recordings ever. This must have been a great show to see live!

Here are excerpts from other reviews:

From The Daily Planet:


…a killer re-issue of early material by Senegal’s mighty Orchestra Baobab. Orchestra Baobab are renowned as one of Africa’s finest ensembles. Formed in 1970 to ‘lively up’ the prestigious Club Baobab in Dakar, the group went on to become a creative powerhouse mixing Cuban rumba, US soul and southern Senegalese traditions of melodic drumming from the Casamance region. For a decade or so they ruled supreme, until their style fell out of favour in Senegal, only to be re-discovered by the world a decade or so later. 2002’s comeback album, Specialist In All Styles proved that the band had lost none of its inventive and exceptionally groovy spirit. Now this recording from their early days reminds us just how progressive Orchestra Baobab always were.


Senegalese afrobeat legends Orchestra Baobab shouldn't need any introduction - From 1970 to 1979, Orchestra Baobab cheered up the Baobab night club located in Dakar, Senegal, West Africa. Orchestra Baobab’s music stands as the soundtrack of that period, known as the Senghor years, in reference to Senegal’s former president. This collectable vinyl LP (limited to 500 copies) includes some of their lost recordings from 1972-8. Gifted with a very unique sound, Orchestra Baobab revolutionized Senegalese popular music by leaving behind afro-cuban influences for good. The musicians developed a hybrid music fed by diola, toucouleur, serere, Portuguese creole and malinke saps. Orchestra Baobab’s trademark has since been a polymorphic groove that blends together sweetness & swing, groove & salsa. Amazing!


Senegal's Orchestra Baobab hit its stride during the late 70s, yet for some reason, most of the amazing Afro-Latin recordings made by guitar great Barthelemy Attisso and company during the period have never been reissued. While proper digital remasters of Baobab's prized albums for Disques Buur, Bellot Records, Musicafrique, Productions Ledoux and other French indie labels may still be years away, it's something of a relief that Oriki Music is making a few of their hard-to-find swingers available on vinyl with A Night At Club Baobab. In addition to the desirable head-nodder Kelen Ati Leen and the delightful Seeri Koko from 75's Visage Du Sénégal , you also get the majestic Jin Ma Jin Ma and Diarabi lifted from 78's classic N'deleng N'deleng album. Bring on the boxed set!