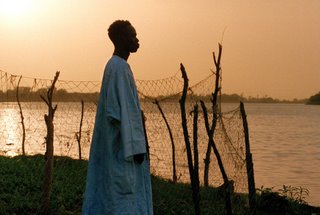 Alternative label Palm World Voices has released an extensive new DVD and CD compilation about Baba Maal, titled “Baba Maal: A Voice For Africa.” The in-depth bigraphical overview includes a CD with recordings tracing Baba Maal’s career as well as a 60 minute DVD featuring interviews and rare concert footage. Also included is a 48-page book with dozens of photos, accompanying an essay by British journalist Robin Denselow, as well as a geographic and cultural map of Senegal that traces Baaba Maal's life.

Palm World describes itself as “a new series of CD and DVD releases that invites music and culture lovers to completely immerse themselves in the vibrant imagery, history, culture, and terrain of musically rich areas of our globe.” Palm World’s notes Baba Maal’s impact:


Senegal's shining star and the voice of his people in a country with an embarrassment of musical riches. Fusing traditional African music with elements of pop and reggae, Baaba Maal's signature sound led the globe-sweeping wave now known as 'Afro-pop.'

You can check out Baba Maal’s website to downloard the trailer for the film, or download a podcast intview of Baba Maal with British broadcaster Gerry Lyseight. In the interview, Baba Maal shares what motivates him:


…to work harder to contribute more to improving the living conditions of disadvantaged people of the African continent, especially young people, whose future is seriously threatened by illiteracy, poverty and HIV/AIDS. When I am talking about Africa, it is about how Africa will grow into the new millennium.

This project is an overdue recognition of Baba Maal’s musical and political impact, and may help spread the word about his music and message. Also check out this nice article about Baba Maal by Struan Douglas, originally published in Downbeat magazine.