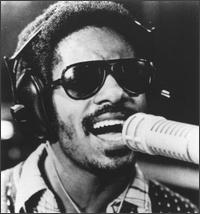 "When you believe in things
That you don’t understand,
Then you suffer,
Superstition ain’t the way…"

Check out this amazing live TV footage of Stevie Wonder playing “Superstition” on German television (1973?). They didn’t bring the horn section, but the brilliant guitar work and back up singing more than make up for it. What a performance!

The AfroFunk Forum has had visitors from more than 53 different countries in our first six months of existence. Yet for those of us preparing for another “wartime” election in the United States, Stevie Wonder’s words of wisdom still ring especially true as an inspiration more than 30 years later.

I’m increasingly optimistic that at least some of the current superstition and suffering afflicting our country will end (or start ending) with the US election in November. Sadly, in 1973 it must have looked at least as bleak in the US. Yet Stevie continued putting it on the line—I hope you are planning to do the same this year.

This is an historic funk and social justice classic—enjoy!