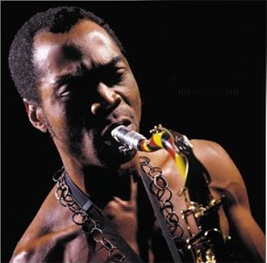 There's a strong new essay about Fela Kuti currently featured on the homepage of the excellent Fly Global Culture website. The Fela Renaissance is clearly continuing to generate critical attention and reassessment. The article, by Nigerian poet Patrick Iberi, is a sympathetic and well-written portrait of Fela as revolutionary and musical rebel:


Fela Kuti as an artist embodied different things to different people. For the vast majority of Nigerians, he stood tall as a social crusader who championed the fight against oppression, government excess and corruption. To the
authorities, he was just a dissenter, a cannabis-smoking saxophonist who was to be vilified, hounded and imprisoned. To the rest of the world, he was more like the eccentric performer whose unyielding lyrics gave jazz a rebel face. Indeed, Fela's life as a maverick resonated in the genius of his art: Afro beat music so subliminal, so dissident and yet so persuasive.

The political challenges Fela faced in his day remain the same problems we face today in the US and in many places--certainly adding to the continuing relevance of his cultural and political message. As Iberi points out:


Fela's frown on Western imperialism resonated in every note from his saxophone and his music castigated the authoritarianism that was prevalent in Africa following independence. This man made no pretence of perfection, he lived his life with apologies to no one. Fela was passionate, unpretentious, self-indulgent and above all unorthodox. He refused to be confined to the norm--he defined himself. A true renaissance man who not only influenced his family and friends but also every individual in the world today whose voice is fervent enough to be raised on behalf of someone else.