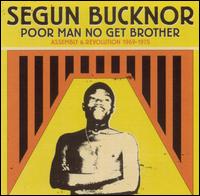 A recent album from Afrostrut Records recounts the classic sounds of the underrated Segun Bucknor of Nigeria. Titled “Poor Man Get No Brother: Assembly and Revolution 1965-1975,” it’s a time-capsule of an effervescent musical era of funk, groove and re-evaluation of traditions.

From a recent BBC review: “the funky James Brown-inspired horn riffs and throbbing bass communicate quite nicely, and Bucknor's urgent, half-sung, half-shouted vocals would be persuasive in any language.” The BBC continues:


This reissue of various Bucknor recordings made from 1969 - 1975 represents an interesting slice of Nigerian pop music history and culture. Much of the Nigerian music packaged for export to the West has promoted a particular musical style or point of view - hence the popularity (and availability) of recordings by the likes of juju artists King Sunny Ade and Chief Ebenezer Obey, as well as the more controversial Afro-Beat of Fela Kuti.

Bucknor, on the other hand, was one of the rank and file, a journeyman who was trying to eke out a living in Nigeria as a popular musician, and who was beholden to local record labels and the demands of the marketplace. Even over this relatively brief six year period, playing first with a group he called The Assembly, and then with The Revolution, Bucknor displays a stylistic diversity reflecting everything from pure commercial opportunism to heartfelt political and moral exhortations.

Regardless, Bucknor's individual talent almost always shines through. He's a strong, convincing vocalist in the American soul tradition, and had obviously listened closely to the likes of Otis Redding, Wilson Pickett and Sam Cooke. In fact, Bucknor had a direct connection to Western pop music influences, because he studied in New York City at Columbia University in the early 60's, pursuing a liberal arts curriculum and taking courses in ethno-musicology.

All Music Guide also has a nice summary of Bucknor’s newly released recording, including links where you can hear song samples:


If anything good came of Fela's death, one thing was the attention focused not only on the music of the man, but of his country. As aficionados of Afro-beat have known for a long time, there were other bands and sounds that erupted from Lagos during the '70s. Bucknor was a contemporary of Fela, and hugely popular in the country. Of course, a lot of this sounds like the man himself — it would be asking a lot not to be influenced by that sound. But the progression of the songs here is more rhythmic and more circular — not a march toward the abyss, but a march around your head. The first and most important thing Bucknor wants to do is to make you dance. The lyrics are strong and mostly political, but the groove is the thing here. These tunes are drenched in sweat, played with the hard-edged precision of men who could and often did play for hours. Fans of the sound will love this. Anyone who's fond of funky music or who loves the sound of Memphis and Muscle Shoals and Detroit but hates the time limitations of the 7" groove will dig this severely. This is another great moment from a scene that is only now reaching Western ears. Stay tuned.

The recording appears to be out of print, so if any readers know where copies are available, please post a comment and let us know. Incredibly, a used copy was for sale on Amazon today for $83. Priced to move.

You can see additional album reviews from Steve Hegede, or check out a sample of the album tracks “Adanri Sogbasogba” here, or “Son of January 15th” here.