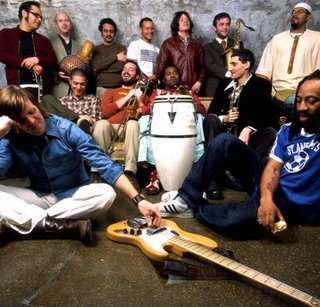 Check out this superb streaming video of the incomparable Afrobeat super-heroes Antibalas Afrobeat Orchestra, straight out of Brooklyn, NY. It’s a live performance in the studios of KCRW, the music-oriented public radio station based in Santa Monica, California, USA.

As you would expect, the band is super-tight and grooves hard to classic Antibalas highlights including “Big Man,” “Indictment,” “Government Magic,” and “Who Is This America?” The streaming video has excellent sound quality and also includes an interesting interview with band leader Martin Perna and other members of the group. It’s amazing how these guys can bust it out even in a live studio setting.

Since forming in 1998, Antibalas has helped keep alive the spirit and music of Fela Kuti, and they have been a crucial inspiration to the worldwide Afrobeat Renaissance that gains momentum daily. I remember the physical rush I felt the first time I saw Antibalas at a club in Brooklyn, thinking “how can this be possible?” They were a local sensation in NYC before becoming internationally-known neo-Afrobeat pioneers.

While Antibalas has toured in more than 13 different countries and has performed with artists such as Tony Allen, Femi Kuti, Baba Maal, James Brown, Burning Spear and Taj Mahal, they expand the Afrobeat genre considerably with their own original material, which is doused in latin funk, roots dub, free jazz and political confrontation. It’s a flaming, super-funky mix that remains among the most vital music being produced today, if you ask me.

In the video clip, Martin Perna of Antibalas expands on how Antibalas came to lay down the Rosetta Stone of the modern US Afrobeat movement:


KCRW: Obviously Afrobeat is at the root of what’s going on for you guys, and picking up the Fela Kuti torch. Why did you guys decide that this was music that needed to still be heard, and heard in a modern context?

Martin Perna: Well, it had never really been heard too much in the United States. Even though it was created in the late 60s and early 70s, Fela and the Afrika 70 and the Egypt 80 did most of their performing in West Africa, and a little bit in Europe. And it only got over here towards the end of Fela’s career and life. In Fela’s own words, “music is the weapon of the future.” And there is so much stuff going on in the United States, so many ways that we’re oppressed, taken advantage of. This model, this idiom that he created is the perfect way to express ourselves artistically, politically, spiritually, musically, all these things in one. We all partake of other kinds of music, and are really deep in other kinds of music. But Afrobeat is what brings us together as Antibalas, that’s how we speak.

Definitely check out the Antibalas website if you haven’t already. Pick up their CDs and see for yourself. From All-Music Guide’s review of their first major album, Liberation Afrobeat, Vol. 1:


A slab of pure, hot, and heavy Afro-beat from the heart of Brooklyn. Antibalas is a musician's collective dedicated to furthering the Afro-beat gospel at any cost, and with 13 members and a boatload of frantic, bass- and drum-heavy chops, they're likely to succeed. These cats don't just have the form down; they're not just aping Fela, they're deconstructing the Afro-beat rhythms and harmonies down to the last detail and composing new sonic architectures from which to groove and improvise. This is deep, funky, political, spiritual, and greasier than a chicken bone out of the fryer. Tracing in just enough Cuban son to add dimension and the ghost of a sleng-teng rhythm here, a dub bass out there, and the ever-shifting polyrhythms of Afro-beat jazz and hypnosis of James Brown's funky soul, Antibalas takes eight tunes and turns them all into floor-burners.