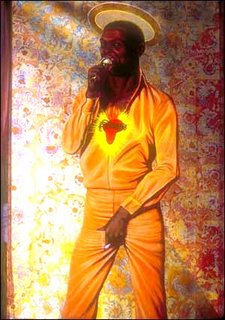 On September 23rd, Fela fans in Lagos had the chance to participate in the annual Felabration, a celebration of the life and meaning on Fela Kuti at The New Afrika Shrine. Held the day after Fela’s birthday, the event drew large crowds to memorialize Fela and witness the relics of his manic vision. In life, Fela was raised to a near-deity status by fans worldwide, a status that has changed little since his death, as described in The Daily Sun of Lagos:


The narrow entrance, built purposely to check crowd influx gave way to a narrow but culturally designed passage. Walled by ropes that bore palm fronds, the route that led to the main auditorium took passers-by through series of Fela’s mementos. There were about three stops. Each stop, a genuine hut played host to personal effects of the Abami Eda himself. One of the huts for instance had all the sleeve album covers of Fela on display. There was also an array of his clothes and shoes suspended on the walls of the huts. Other objects that drew attention were the age-long saxophone, cigarettes, photographs, and the statues of Fela.

It’s no understatement that a first timer would scamper for dear life on entering the last hut. But for the water works, every other object there were fit for a shrine. And truly, there among the water fountain, busts, and other images of the deified Fela. Seated beside the god was a shrine priest, naked, save for the half-yard cloth appearing as a pant. His posture was harmless, only that the shrine make-up could arrest a novice’s courage. On the floor were broken kola nuts.

Two flat ceramic plates, one containing palm oil and the other salt, sat comfortably as he did at either edges of a bit raised concrete ground fencing the shrine. Huge even in his sitting position, the priest occasionally sprinkled the running water on the fixed Felas around him as if he had received a warning; "We must not be thirsty for a second". He never spoke all through the presence of this reporter….

Felabration organizer Tunde Oshnubosi, a.k.a. Laface, argues that “Fela is the most popular Nigerian in the world,” and he sees the annual event and concert series as a way to increase Fela’s profile within Nigeria and also to help develop the Nigerian tourism industry. As quoted in The Vanguard (Lagos):


All over the world, other countries celebrate their own icons, in grand style and on a yearly basis; Bob Marley and Elvis Presley. They build major tourist attractions around their icons. The time has come for us to do the same in Nigeria with Fela. We need to attract people from all over the world to Nigeria. In the name of Fela and building our tourism industry and making Lagos a major tourist haven. Nobody will do it for us, we shall have to achieve this ourselves--Fela like football unites Nigerians across religion and ethnic background.

If any readers have a first hand report on this year's Felabration, please send it to The AfroFunk Forum and we’ll post it!

The painting included in this post is Barklay Hendrix's portrait of Fela from the 2003 exhibit Black President: The Art and Legacy of Fela Anikulapo-Kuti.