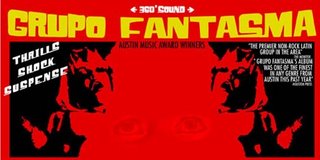 By Robert Fox
A few weeks ago, I had the chance to see a performance by one of my favorite active bands anywhere in the world: the eleven-piece Grupo Fantasma, straight out of Austin, Texas, USA.

Although their sound is often classified as cumbia, in fact they bring it hard from several different directions including funk, classic salsa, hip-hop, mambo and merengue. They feature a four-piece horn section, multiple percussion, two blistering lead guitars, and dynamite vocalizing in Spanish and English----all wrapped in an air-tight, JB-style groove.

It really doesn’t get much better than this, as far as I’m concerned. To my ears, Grupo Fantasma is the closest thing you’ll hear these days to the classic Fania All-Stars live recordings from the mid-1970s, which still represent the definition of elegant yet incendiary funk. Grupo Fantasma has the whole package working: the scratchy, charanga-like rhythm guitar, a powerful, unified horn section and a massive rhythm section attack that frequently catches you off-guard. Exciting lead guitar and up-to-date vocalizing add radical new elements.

I’ve loved these guys ever since Michael Shereikis of Chopteeth turned me on to them after seeing a Grupo Fantasma club show in Atlanta, GA a couple of years ago. They’ve been together for six years and have released two outstanding self-released studio recordings, titled “Grupo Fantasma” and “Movimiento Popular.” Band members have also collaborated with Martin Perna of Antibalas on the creative “Ocote Soul Sounds” recordings, and also have participated on a number of other interesting musical projects centered in Austin.

Now you can catch the band live yourself on their newly released live CD, Grupo Fantasma Comes Alive. I really like this recording. It captures the band at a new peak, and fans of afrobeat and funk will find much to love here. I especially enjoyed the blistering version of JB’s Doing It To Death, which connoisseurs will recognize from the classic “Rumble in the Jungle” recordings from Kinshasa, Congo (a bill also featuring the Fania All-Stars, featured here previously).


It's been nothing but ascension for Grupo Fantasma since their self-released, eponymous 2001 debut. That turned ears, but 2004's Movimiento Popular rightfully earned this Latin big band Top 10 accolades and Austin Music Awards. On stage, the local groove collective hits like a ton of bricks, so earlier this March, Advanced Mirco Devices' custom recording rig captured all the harmonic magic flowing from Antone's storied stage. Three more things give Comes Alive its sabor grande. First, songwriting: Nearly all the baker's dozen tracks are original, blending seamlessly with "Cocinando," by the late, great conguero and bandleader Ray "King of the Hard Hands" Barretto. Second, the well-paced, bouncy songs pour with pure melodic energy, "Mentiras" into "Chocolate," and the one-two punch of "Dos Regalitos" into "Saca La Basura." Last, Grupo Fantasma's chops shine, free and in sync. And this ain't a prog trio, but an 11-pistoned Latino funk machine whose horns evoke like Nelson Riddle conceived in Spanish Harlem. What's more – save for the delicious, Santana-inspired rhythmic workout of "Rico Tumbao" – it's as if the band's tank remains full after each generous throttling. Get it, spin it, cherish it. Comes Alive is easily one of the finest live albums to come out of the ATX.

For more info, definitely also check out the Grupo Fantasma website and My Space site. And definitely don't miss these guys if they come to your area.