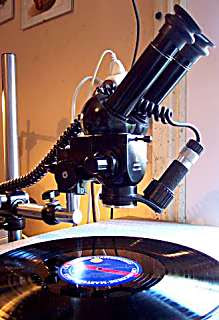 Music fans and collectors these days are enjoying an unprecendented heyday of music from around the world.

The causes are many: the growth, stability and increasing sophistication of online music sources such as Calabash Music, Rhapsody, iTunes, etc.; the collapse of the traditional business model of record production in the US and other industrialized countries; the widespread availability of inexpensive digital technology for recording; more reliable international distribution of CDs.

All of these factors combine to help decentralize control and distribution of music, which encourages niche markets--including "world" music in many countries--instead of polished commercial pop, rap, infotainment, etc. Let the (musical) good times roll!

At the same time, countless blogs along the lines of this one provide outlets for music cultists, addicts and obsessives. Previously, we only bored our friends and families with chronic listening, collecting, discussing, opining. Now there's a worldwide audience!

And the music spreads...

The Boston Globe ran a thoughtful article this week which reviewed the amazing expansion of the market for "world" music in the US and internationally. It includes positive mentions of many recordings we've covered here on the AfroFunk Forum, and also highlights the explosion of interest in Afrobeat as a factor in the growth of the world music market:

A recent spate of astonishing world-music compilations, many from
countries often associated more with political unrest than rocking out, have
expanded the musical globe, filling in what were once blank spots on the map.
With eyes and ears opened by groundbreaking prior releases, inquiring minds want
to know: What does Burmese pop sound like? And what happened in Brazil after the
Tropicalia movement had its late-'60s run?
Music made outside the borders of the United States and the United Kingdom has long been a presence in American record stores, primarily African and Brazilian music. But in recent years, the level of interest in exotic world music has increased sharply. The music industry's split into dozens of small niches has helped to create a market of highly informed, adventurous music fans who - like the film buffs who spent the 1990s embracing movies from Taiwan, Iran, and China - seek fresh sounds, whatever their provenance.
Plus, the influence of well-regarded world releases such as the "Ethiopiques" series of Ethiopian rock and jazz and the rerelease of influential Afrobeat pioneer Fela Kuti's albums have helped to generate a hunger for more of the same...
Having heard Fela's "Original Sufferhead" or Luaka Bop's collection of
Brazilian music, "Beleza Tropical," eager music fans now ask, "Is there more
like this?"...
And there's plenty to choose from, including such recent compilations as
"The Roots of Chicha," "Brazil 70: After Tropicalia," "¡Gózalo! Bugalu
Tropical," "Thai Pop Spectacular," "Colombia! The Golden Age of Discos Fuentes,"
"Molam: Thai Country Groove From Isan, Vol. 2," "Cult Cargo: Grand Bahama
Goombay," and "Sí, Para Usted: The Funky Beats of Revolutionary
Cuba."
African music - including the crystalline pop of "Authenticité: The
Syliphone Years," "Bokoor Beats," and "Belle Epoque 1: Soundiata" - is still a
staple of compilations this year, but its ubiquity has been supplanted by other,
less-familiar destinations. Some, such as "Thai Pop Spectacular," skew toward
the campy end of the spectrum, while others, including "Sí, Para Usted," lean
toward the scholarly side, offering detailed liner notes and a brief explication
of the music's roots in Fidel Castro's revolution and the Cuban government's
monetary support for music schools and musicians.
With the surge of world-music compilations, the need for expert talent
scouts who can sort the diamonds from the dross grows ever greater. Now that all
the world's music is available, who will tell us what is truly worthwhile?
"Music has become very cheap in a way because everybody has an
iPod with 7,000 songs, which are not organized," says Conan. "I think anybody
who does the work of putting together a playlist with some sort of identity and
cohesiveness will get noticed."