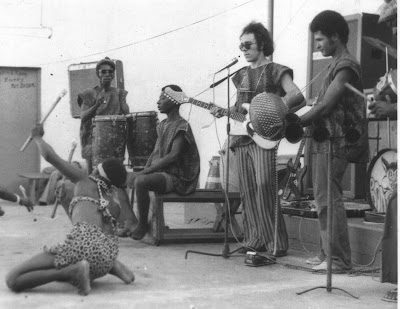 
Otrabanda Records recently released a superb new compilation of classic 70s-era Ghanaian tracks, titled “Bokoor Beats: Vintage Afrobeat, Afro-Rock and Highlife from Ghana.” I’m really enjoying this disc, and it includes some moments of brilliance from early in the development of afrobeat, tracks which were previously hard to find anywhere.

Like many of the most innovative and dynamic Ghanaian records of the era, all of the tracks trace their provenance to musicologist and producer John Collins, whose Bokoor Studios became the focal point of an exciting and innovative new music scene Ghana. It’s influence spread throughout West Africa and beyond, and Collins’s studio became the only place in Ghana to record if you wanted to update roots music with the new funk and rock sounds arriving from the US, Cuba and Nigeria.

Collins converted his father’s farmhouse into one of two music studios in Ghana, and recorded more than 200 different groups over the years in a variety of styles including jazz, gospel and reggae. He was also one of the organizers of the first musicians union in Ghana, The Ghana Musicians Union. But it was the funky sound of afrobeat he produced in the 1970s that arguably had the biggest impact on West African music:

Banning Eyre offers some perspective on this period of musical creativity:

In Ghana, the '70s was a time of political repression, high inflation, and funky
pop music. Among the musicians working the clubs in the Ghanaian capital, Accra,
was a young British emigre named John Collins. Collins played guitar and
harmonica, and even sang and composed with local bands. Later on, he became an
important music producer in Ghana, where he still lives today. On Bokoor Beats,
he compiles some of his favorite songs from his early days on the Accra scene.

Bokoor means "coolness," and when Collins co-founded the Bokoor Band in
Ghana in 1971, they covered Jimi Hendrix, Carlos Santana and James Brown. When
the group hit its stride a few years later, the Bokoor Band had folded those
influences into original songs. They drew on Ghana's sunny "highlife" style, the
funky, politically-edged Afrobeat from neighboring Nigeria, and even the
Latin-tinged soukous sound shimmying out of the Congo… Collins' Bokoor Band
contributes eight of the twelve tracks on Bokoor Beats, but it is their Afrobeat
numbers that really cut to the bone.

While there have been a number of compilations available over the years documenting the music swirling around the Bokoor Band, this is the best material I’ve heard yet. It's great to see it getting warm critical reviews. The recording features a number of choice tracks from Collins’s Bokoor Band as well as classic proto-afrobeat from the Mangwana Stars, Oyikwam Internationals, and TO Jazz. 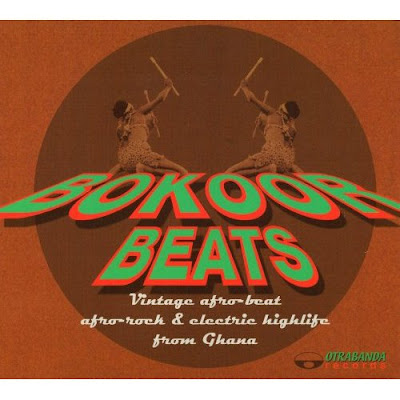 I especially like the up-tempo highlife of “Atiedele” by the Mangwana Stars: with its boppy bass line seeping into your head; the delicate, interlocking guitar work; the atmospheric keyboards; and the chorus vocals. This tune is an overlooked gem.

The Bokoor Band’s “Yeah Yeah ku Yeah” sounds like Sly and The Family Stone’s funky trip to Ghana, if they brought a harmonica with them.

“Anoma Franoas” by the Oyikwam Internationals features a blasting horn section over a silky-smooth highlife guitar rhythm, groovy beats and warm, personal vocalizing.
You can’t help but love this tune.

Fans of classic 70s music from Ghana will definitely appreciate this recording. I’ve been listening to it on Rhapsody’s subscription service, but you can hear song samples and purchase digital tracks online from Calabash Records.


Calabash is also offering a free download of “Egbe Enyo” by the Bokoor Beats, an excellent, hard driving, roots afrobeat tune that cuts out superfluous ornamentation and gets right to the core of the groove. Dynamite stuff!