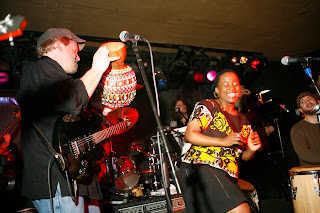 The Sunday Washington Post ran a nice article about Afrobeat this week, featuring Antibalas and Chopteeth (photo right, by Veronika Lukasova). The article is by the Post music critic Stephen Brookes, and it’s one of the few pieces out there that takes an overview of the US Afrobeat movement and tries to make some sense out of it.

Here are some excepts---the article starts out with a review of a recent Chopteeth performance at a rally to support the organizing drive of sanitation workers at Camden Yards, the Baltimore Orioles baseball stadium:

It's a gritty afternoon in a gritty parking lot in a gritty South Baltimore neighborhood, and the crowd is starting to fade. For the past five hours at this human rights rally, poets and rappers have been taking the stage to one-up one another's outrage, and now even the most anguished cries -- "the beast of the United States is eating wherever it wants!" -- are met with little more than polite nods. The sky's getting dark, the slogans are getting tired, and you can see people thinking that the struggle for justice should maybe just take the night off.

Then a new band takes the stage -- and suddenly a driving pulse erupts, powerful and irresistible. It's unlike anything else at the rally that day… This music has the drive of 1970s funk, the subtle rhythms of Yoruba tribal music, the fire of Ghanaian highlife. And when the five-piece horn section kicks in, driving the energy higher, everybody -- everybody -- starts dancing.

"We're here tonight to see people get active!" shouts the band's leader, pumping a fist in the air. "Otherwise, it's all over!"

The music is Afrobeat -- a fiery brand of political dance music pioneered in the 1970s by the Nigerian activist Fela Kuti -- and the group is Chopteeth, a 14-piece big band that's part of an Afrobeat revival across the United States. Thirty years ago, Afrobeat was the most important new music in Africa, fusing James Brown-style funk, African rhythms and urgent messages of political confrontation. But it never became an international phenomenon like reggae, and nearly vanished a decade ago when Kuti died.

Over the past few years, though, this profoundly African music has found a new home -- in America.

Martin Perna of Antibalas (photo below) also provided an interview for the Post article, adding a perspective on Afrobeat and its message: 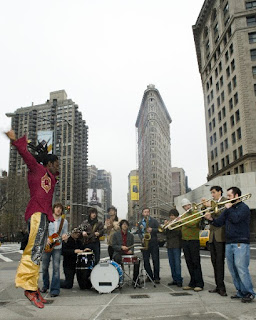 "Afrobeat was a way for me to merge my political convictions with my convictions as a musician. It's inherently a music of resistance and a music of struggle, and if you're going to reach people with any sort of message, you've got to put it to a beat."

Reinventing Afrobeat may be the key to its survival, its proponents say. The music is unlikely ever to enter the mainstream -- "there's too much stuff in Afrobeat for the market to dumb down," says Perna -- but if it's going to take root in American soil, it needs to adapt. The new players are hardly African firebrands. They tend to be American, white and mostly suburban. The music even seems to be turning into new, hybridized genre -- call it American Afrobeat -- with an agenda of its own.

"Most of the groups doing Afrobeat are either multicultural or predominantly white," says Perna, whose own background is Hispanic. "How they address the privileges they enjoy -- male privilege, class privilege, skin color privileges -- will give American Afrobeat its depth; looking within themselves, rather than just pointing. Anybody can point a finger at George Bush, or the Iraq war, or police brutality, and write a song about it. But the real depth comes from examining these other systems of privilege. And we try to do that in our music."

It continues to amaze me how Afrobeat musicians in the US and other parts of the world are adapting Fela’s music in new ways to reflect their own musical interests and their own message. The music is flourishing all over the world, and seems to only be growing in popularity and attention. Keep it going!