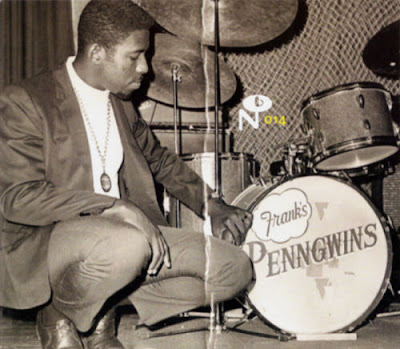 A while back we did a post on "Cult Cargo: Belize City Boil Up," an outstanding album of rare 70s-era funk, soul and reggae from Belize, a small country with remarkably diverse musical and cultural roots. Be sure to check out the second installment of Pan-American vibes from the excellent Numero Group label, "Cult Cargo: Grand Bahama Goombay," an equally satisfying set of funky '70s tunes from the Bahamas.

What is "goombay"? Numero Group has the answer: "Goombay is a drum. Goombay is an annual Bahamian street festival. Goombay is a flavor, literally, and not entirely distant from pina colada. And goombay is the genre of Bahamian music given its name by the drum that beats its rhythm.

But goombay is also a sort of shorthand for what native Bahamian musicians of the 1970s crafted: an island music instantly familiar and specifically Caribbean, yet unequivocally Bahamian."

The music is edifying and entertaining from start to finish, filled with vintage organ, heavy base lines and deep, deep soul. Kudos to Numero Group for pulling these invaluable remnants of Bahamian culture from the verge of extinction. The opening tune, "Gonna Build a Nation," a plea for civic participation in the wake of the country's newfound independence, was banned by the state controlled radio station for being too cynical. ("Building a nation on the sand, everybody gotta lend a hand. This won't be a whole lottta fun, but if we don't do it, it won't be done").

"Don't Touch That Thing" offers a different kind of lesson ("Don't touch that thing, your mama gonna know. How she gonna know? Your belly gonna show.") Songs like "Goombay Bump, "Tighter & Tighter," and "Funky Fever" are -- as their titles suggest -- just downright tight and funky. And don't miss the funky Bahamian version of the jazz classic "Take Five."

So, put on your flip-flops and start making those blender drinks - and give "Cult Cargo: Grand Bahama Boombay" a spin or two on your CD player.