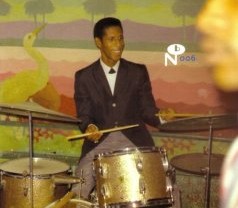 Cult Cargo: Belize City Boil Up is a rich blast of classic grooves that reflect the diverse cultural history of Belize, mixed with a heaping dose of 70s-era funk, soul and reggae. This 2005 release includes some outstanding local hits from back in the day, and the raw, groovy sound will definitely get you up out of your seat.

Belize is the small Central American nation wedged between Guatemala, Mexico and the Caribbean Sea. It’s one of the more diverse nations in The Americas, boasting a population that includes the Native American descendants of the Mayans, Spanish-speaking mestizos, the Afro-Amerindian Garifuna, plus the descendants of Africans brought by to Belize by the British colonizers.

Throw in the musical influences of Cuba and Mexico, plus a shot of James Brown and some scratchy low-fi recording equipment, and the result is Belize City Boil Up—a vibrant mix of dance music, salsa and sucker-punch funk. This I like!

These tracks were rescued from obscurity by the fanatics at Numero Group records, who have now released six CDs worth of previously lost gems from all over. Here is how they describe Belize City Boil Up—you can check out the song samples and see for yourself:


Belizean’s call it Boil Up, and it’s anything but leftovers. Mix equal parts R&B, calypso, disco, funk, reggae, bruckdown, soul, folk, and whatever else can be found back on the bottom shelf of the musical pantry. Get ready to feast on passport stamped rhythms, second-deck cruise ship melodies, hotel pool calypso, soundtracks to movies not-yet-made, and anything else savory, or unsavory, enough to throw into the pot.

While you’re at it, take a look at Numero Group’s catalog and outstanding website, which includes a digital dig of unearthed singles and rare tracks you can purchase online. Numero Group is definitely worth paying attention to—here’s how they describe themselves in one of their less modest but poetic moments:


Anything but another record label. Please, we don't need another one of those clogging up the bins. Accountants with coke habits, lawyers using a Pitchfork as a tip sheet, 60 year-old executives awkwardly trying to converse with 17 year-old groupies. Marketing meetings. Junior VP's.
Enter the Numero Group... a big pile of music that no one had ever heard of. The mission was simple: to dig deep into the recesses of our record collections with the goal of finding the dustiest gems begging to be released from their exile on geek street.

Right On! This is a record label to watch.