Curtis Mayfield Is The Answer 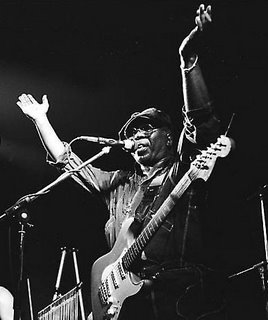 Curtis Mayfield inspired people everywhere with his political vision, personal insight and ground-breaking soul and funk. The worldly music he laid down with The Impressions and on solo albums like “There’s No Place Like America Today,” and “Superfly” live on with enormous influence among musicians, fans and activists. These recordings are among my favorites in any musical genre. Curtis’s “People Get Ready” is an anthem for the ages, and is my personal standard for music to organize a revolution with.

Recently, there was a wonderful radio memoir related to Curtis Mayfield on the National Public Radio show “Studio 360.” It’s by Dave Alvin of the roots-rock group The Blasters. In the moving memoir, Alvin describes the challenges of his early music career, and how seeing Curtis Mayfield perform helped him regain his focus on what's meaningful and on why musicians are so fortunate. He describes how Curtis changed his life---I’m sure he’s not the only one.

Check out this wonderful streaming audio file (4 minutes) of Dave Alvin on the impact of Curtis Mayfield.

The music in the memoir is from the phenomenal Curtis/Live! album, recorded in 1971 at New York’s The Bitter End. All Music Guide calls it “simply one of the greatest concert albums ever cut by a soul artist.” It’s truly amzing, and still precisely on the mark politically.