Stars of The Sahara 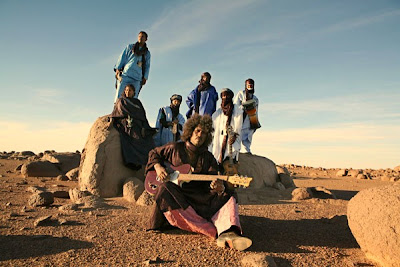 Tinariwen has certainly been in the news lately.

In February 2007, they released their fantastic third allbum, Aman Iman (meaning "water is life"). Many have been aware for some time of Tinariwen's enchanting "desert blues" sound, but as All Music Guide points out, "they're a remarkable rock and roll band, too." Indeed, their interlocking guitars "create a glorious syncopated noise that puts most rockers to shame."

The music is downright exhilarating and has attracted loud praise from long-time rock heavyweights Carolos Santana and Robert Plant. Check out this video of Santana with the band at the Montreux Jazz Festival. Or how about this one with Robert Plant, playing "Whole Lotta Love."

The band was also featured on the cover of the March/April issue of Songlines, which asks: "Is Rock 'n' Roll Ready?" Who wouldn't be ready for the searing guitar work, the intense, hypnotic vocals and the potent, rythmic vibes?

And now Tinariwen have been chosen to open for the Rolling Stones in front of a 65,000 strong crowd at Slane Castle, Dublin, Ireland next August.

Certainly a far cry from their stunning first release, the Radio Tisdas Sessions, recorded in a small town in northern Mali on rationed electricity from a generator. Just another powerful example of the universal appeal, and growing popularity, of African music.