Stop The War with Afrobeat 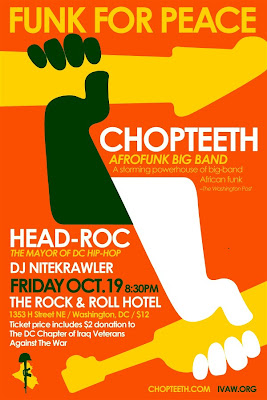 Chopteeth Afrofunk Big Band hosts “Funk For Peace” on Friday, October 19th at The Rock And Roll Hotel. Two dollars of every ticket sold will go to the DC Chapter of Iraq Veterans Against the War. Veterans will be at the show to provide first-hand information from Iraq.

“If we leave it up to the politicians, our troops in Iraq are never going to come home,” says Geoff Millard, President of the DC Chapter of Iraq Veterans Against The War (IVAW). “So we have to make it happen. We have to take charge of our democracy and end the war. IVAW is not waiting for an election to end the war.”

Funk For Peace will be an opportunity to get down with some of the most exciting dance music DC has to offer, while at the same time supporting expanded veterans benefits and a withdrawal of US soldiers from Iraq.

Chopteeth will be joined by Head-Roc, the Mayor of DC Hip Hop, known for his positive, politically-conscious message as well as his profound groove. DJ Nitekrawler will also be spinning his special selections from his ridiculously wild funk, soul, and afrobeat dance party.

Can't make the show? You can still make a donation to The Iraq Veterans Against The War.