We Were Lucky To Have Him 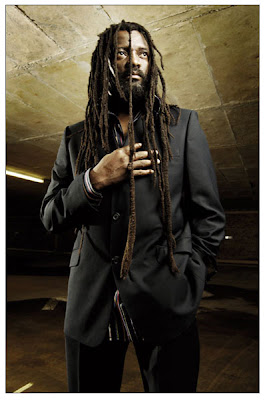 This is a very sad day for world music. Lucky Dube, an icon of both the South African and reggae music scene, was tragically killed on October 18 in an attempted car-jacking outside Johannesburg.

He achieved tremendous critical and commercial success over his long and prolific career -- and deservedly so. His music is filled with gorgeous melodies, but it also conveys important political, social and moral messages. He made many worthwhile albums, put on a captivating live show, and had a huge and loyal following throughout Africa and among music fans worldwide.

I've long been a huge fan of reggae music and in my college days I was fascinated with African reggae artists such as Lucky Dube, Alpha Blondy and Sonny Okosun. These artists were some of my earliest introductions into the broader world of African and World music. I have particularly fond memories of my old cassette tape of Lucky Dube's "House of Exile"--one of his classic albums that I could never get enough of. My car stereo could never play it loud enough.

It's sad to think of how he was senselessly cut down in the prime of his life. The world has lost a vital and beautiful voice. We'll miss him deeply and we'll always remember the wealth of great music he has given us. We were lucky to have him.