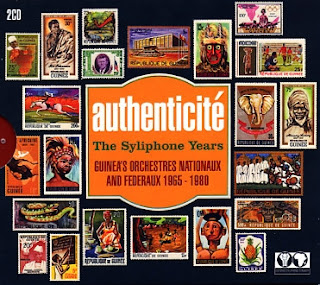 "Authenticité" refers to Guinea's state-sponsored program to establish national and regional orchestras to promote authentic Guinean culture in the wake of the country's newfound independence from colonial rule. As RFI Musique explains:

"Guineans celebrated the dawn of a new era in 1958, waking up to their newly won independence. But once the celebrations had died down, President Sékou Touré was faced with a harsh reality. After years of French cultural influence, the former colony had totally lost touch with its musical heritage and its own cultural roots. When President Touré wished to organise a grand musical gala in Guinea, he had to call in ET Mensah, the Ghanean king of high-life, because no local group had ever developed a repertoire based on traditional home-grown songs and rhythms."

"In a bid to turn this disastrous situation around, President Touré instituted a government initiative based on reviving authentic Guinean culture and creating a popular style of Guinean music by modernising tradition. President Touré saw in this cultural initiative a vital means of forging an all-important sense of national pride amongst his compatriots."

Perhaps ironically, the music is actually a vibrant blend of Guinean traditions with a variety of foreign instruments and influences, including Ghanian highlife, Cuban rhythms and Congolese rumba. The result, according to All About Jazz, is "magical and transporting," music that is "the best of both worlds."

The two+ hours of Authenticité powerfully captures the golden age of Guinean music. As the Matsuli Music blog explains: "Times like these can't last - and they didn't. But while they did, the party was jumping and the music was glorious." For all you African music fans out there, Authenticité is a vital addition to your CD collecton.