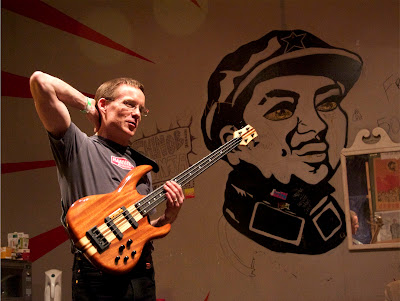 Robert Fox is the bass player for Chopteeth Afrofunk Big Band as well as the Business Director for Grigri Discs. Robert has been playing and collecting music for twenty-five years and is a student of many musical genres. His musical influences include Duke Ellington, Fela Kuti, Bob Marley, John Zorn, MC5, The Velvet Underground, Manu Chao and Johnny Cash. He is a social justice activist who has also worked as a photojournalist, community organizer, translator and fill-in blues radio DJ. He once shook hands with B.B. King while wearing a shirt that said "I Am B.B. King."