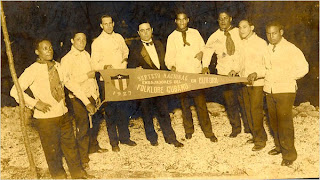 After a brief hiatus, the Afrofunk Forum is back! We're looking forward to sharing some new features, including streaming music files from Grooveshark as well as other goodies, so please stay tuned.

Since our last post in March, this site has had visitors from 146 different countries around the world. That's a pretty amazing testament to how the internet is breaking down borders and facilitating communication across national boundaries (in case you were wondering, we're big in Greece apparently, and Athens is the 4th on the list of the 2,800 cities around the world where people are tuning in to this site).

Readers in other countries may not realize, however, that here in the United States, we're largely prevented from meaningful travel to or communication with one of the greatest hotbeds of music in the world: Cuba. Thanks to the United States economic embargo of Cuba, it is illegal under US law for US citizens to travel to Cuba, with few exceptions, or to even purchase anything from a long list of goods produced in Cuba (like CDs). In recent years, the US Government has also largely blocked Cuban musicians from performing in the United States. And of course the Cuban Government has its own harsh travel and communication restrictions--sometimes relaxed for musicians who don't talk about politics.

Therefore it's big news here that salsa giants Septeto Nacional de Ignacio Piñeiro were granted visas by the US Government, and they are now touring in the US. Yesterday's New York Times had a great article about the history and impact of the group, now in its fourth generation of musicians. Here are some highlights:

The Cuban band Septeto Nacional de Ignacio Piñeiro can legitimately claim to be inventors of salsa. But it last played in the United States when Franklin D. Roosevelt was president, and there was no telling when it might be able to return — until the very slightest hint of a thaw in cultural relations between the United States and Cuba quietly brought the band to New York early this month.
...
Founded in 1927 by the bass player and songwriter Ignacio Piñeiro, Septeto Nacional performed at the 1933 Chicago World’s Fair and is now composed of a fourth generation of musicians. The word salsa as a name for music from the Spanish-speaking Caribbean derives from a song that Mr. Piñeiro wrote in the 1930s and that the group still uses to open many of its shows: “Échale Salsita,” which means “Throw a little sauce on it” or “Spice it up a bit.”

Septeto Nacional arrived in the United States on Nov. 7, played a concert at Hostos Community College in the Bronx that same evening; did a show the next night at a club in Nyack, N.Y.; spent most of last week performing in Puerto Rico; and then returned to New York on Monday. On Thursday night the band is scheduled to play at S.O.B.’s in the South Village, and then will travel to Miami, Chicago, San Francisco and Los Angeles for additional engagements.
...
The genesis of the current tour dates to 2003, when Cuban performers dominated nominations for the Latin Grammy in the traditional tropical album category. Some of Septeto Nacional’s members wanted to attend that awards ceremony, but were refused visas for reasons they said they still did not understand.

“Maybe they thought we were terrorists and not musicians,” said Frank Oropesa, the band’s bongo player and an arranger. “You know, Ignacio Piñeiro played at the Apollo and recorded at Columbia Studios in the 1920s, and we have always been eager to see those places. So we were disappointed when we couldn’t come.”

For both fans and performers of Latin music in the United States, Septeto Nacional’s return after 76 years has been treated as a historic event and extraordinary opportunity. Contemporary stars like Eddie Palmieri, Cheo Feliciano, Gilberto Santa Rosa and El Gran Combo have attended the band’s shows, and Septeto Nacional’s seven musicians were invited to give a master class at a conservatory in Puerto Rico.

“It’s good for them to know us, and good for us to know them,” Mr. Oropesa said of American musicians. “We hope this kind of exchange can continue, because if you want to be a good musician, it is important to be exposed to as many styles and genres as possible.”
...
Members of Septeto Nacional said that they knew that they were breaking ground on their current tour, and added that they were glad to at last be able to “follow the trail of Ignacio Piñeiro.” But when Ricardo Oropesa, their tour manager, was asked if the group was also here as ambassadors, he seemed eager to steer clear of any political entanglement.

“We are representatives of a people and a style of music, not of a system,” he said. “We have represented Cuban culture in the world for 82 years, and we play Cuban music anywhere that there are Cubans or other people who like our sound, even those who think differently.”