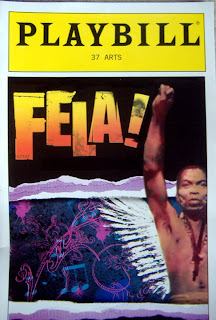 Fela on Broadway? Sounds like a disaster, right? I entered the theater fearing the worst, “Fela, Get Your Gun,” or “West Side Story, Lagos.” Fortunately what unfolded instead was a gritty, hyper-realistic biography of Fela Kuti told in an interview style, bejeweled with Fela’s own afrobeat music! Let’s break this masterpiece down!

Written by Jim Lewis and Bill T. Jones, the story relies heavily upon the best source on Fela: the transcribed interviews by Carlos Moore, “Fela Fela This Bitch of a Life.” Much of the story is biographical FELA 101, including his revolutionary civil rights ideologies, attacks suffered by the Nigerian government, relationship with his activist mother, and development of a novel musical genre, “afrobeat.” For those unfamiliar with Fela and Nigerian pidgin English, the producers thoughtfully include lyric subtitles, and a dictionary in the program. "Fela!" covers much ground, childhood to 1980-ish. Included in the play are some absolute gems of Fela trivia, indicating some serious research. Even I, a pretty diehard Fela fan, learned new facts! Also impressive was a section that deconstructed and then reconstructed “afrobeat” music, describing and demonstrating the sources and evolution of this fusion music in narrative form. Crucial. 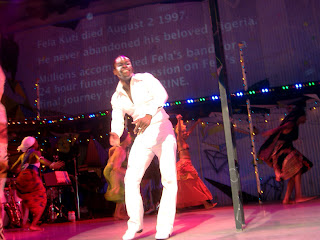 The actors are phenomenal! Fela is brilliantly portrayed by Sierra Leone’s Sahr Ngaujah. It is obvious Sahr engaged in considerable scrutiny of the scant available Fela interviews and performances, as he has mastered Fela’s sly charm, fiery tirades, speech patterns and movements. And what isn’t Fela is real West African, filling in the gaps with palpable authenticity. There were a few moments when I found myself more thrilled than normally play-worthy, as if I was witnessing Fela himself at the Shrine nightclub in Lagos, Nigeria! The “Expensive Shit” scene was especially eerily Fela-esque.

Fela’s “Queens” were impressively portrayed by an international ensemble from Haiti, Zimbabwe, Central African Republic, the Netherlands, and the USA. Each conveyed an appropriate air of fierce pride & rebellious Lagos ghetto refinement. Character commitment even carried over to the way they looked at audience members as the queens passed through the aisles- a nod of solidarity to fellow women of African descent, a disdainful glance at oyinbo. The queens’ singing was dead-on, perfectly capturing the haunting shrill lax unison of Fela’s backing vocals.

Their African dancing was expertly choreographed by Bill T. Jones, and masterfully executed. It was so authentically African as to be absolutely natural and transparent.

The music was perfect, performed by members of Antibalas and Akoya afrobeat bands, as well as NYC mercenaries. The band is on stage and visible throughout the performance, lending a “live at the Shrine” feel to the performance. A brilliant decision to use a real afrobeat band! It was lovely to hear them play some Fela hits often avoided by bands because they are so well known. Like a real Fela performance, the band played long before Fela himself appeared (while the audience entered). Though out of chronological order, themed Fela tunes named and punctuated the scenes. And some obscure cuts- not only greatest hits! As the band dropped the first song, the wicked grooved, seldom heard “Everything Scatter,” the hair stood on the back of our necks, and we the audience knew we were in for some serious funking.

While all band members are masters of Afrobeat, verbatim sax solos by Antibalas’ Stuart Bogie stole the show despite Fela’s (Sahr’s) lip-synching the sax solos on stage.

Some songs were sung a-cappella to haunting effect (like “Shuffering and Shmiling,” and “Trouble Sleep”). Other songs were spoken as narrative, like parts of “Sorrow Tears, and Blood.” Musically, the only detraction I noticed, was the altering of song lyrics to “translate” them for non-Fela fans. The new lyrics lacked the poetic power and cadence of Fela’s originals. Given the projected subtitles of lyrics, I wish they had “translated” them via projection, and left the songs untouched. The Anglicized lyrics were silly, distracting, and disrupted the rhythm of the vocals. "Coffin for Head of State” and “Trouble Sleep” suffered the most for lyric tampering.

Costuming was accurate down to the smallest details. Those of the queens (Act 1) were especially noteworthy, evoking specific wives of Fela in splendorous stage attire.

The performance was enhanced with projected real and simulated video footage of Fela, the police, soldiers, Lagos, Fela’s mother, etc. It added a captivating dimension. Set change was achieved via sophisticated manipulation of lighting and paint. The sets also employed black light paint (invisible otherwise) that made the set burst into a mystical veve mosaic for a stunning vodou scene. One moment we're in the ruby atmopsphere of the Shrine in Lagos, the next we're dancing with Shango in the magical realm of the Ifa.

The night ended with a generous encore of “Gentleman” with none other than Bill T. Jones dancing up a storm wearing only gray suit pants (very Lagos).

Bottom line, this musical sets a new standard for realism and power. This play is a vehicle for the ultimate Fela tribute band, and likely as close to a live Fela show possible. It would be a crime for "Fela!" not to win a Tony.