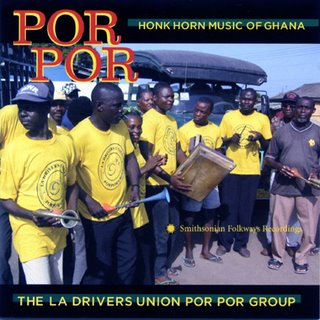 The new album from Smithsonian Folkways Records, "Por Por: Honk Horn Music of Ghana" is an entirely different take on the evolution of traditional music and technology. The technology in question is not synthesizers or samplers, it's truck horns and tire rims. These are funky, strange sounds from Ghana, and it's a safe bet you've never heard anything like this before: singing and traditional Ghanaian percussion with squeeze-bulb horns (think, Harpo Marx). I've been listening to this over and over for the last two weeks, and yes, the DJ Thick remixes of por por are loaded up and ready for the dancefloor (more on that later) ... "Por Por" is available on CD from Smithsonian Folkways or for digital download directly from Smithsonian Global Sound, my favorite music website. Warning: some of the tracks are very hard to listen to while driving!

From the liner notes to the album by one of my heroes, the brilliant ethnomusicologist Steven Feld:

"Por Por (pronounced paaw paaw) is the name of the honking, squeeze-bulb horn music unique to the La Drivers Union of Accra, Ghana, and which is primarily performed at union drivers' funerals. Although Por Por's musical genesis precedes Ghana's independence, it is just now, fifty years later, that this musical history of transport workers is having its grand debut. And what better way to celebrate Ghana's golden anniversary than by honoring the musical inventiveness of drivers who shaped national history by moving goods and people throughout the country?

"Por Por tells a multi-layered story of musics involving local and regional history, colonialism, the diaspora, and globalization. In the context of Ghanaian indigenous music history, Por Por obviously derives from mmenson, the multi-part animal horn music of Akan origin. Later there is also a clear articulation with brass band music, indigenized from colonial origins to become central to the sound of large-group highlife and small-group jazz.

"Adopted by drivers of timber trucks working forest roads, the squeeze-bulb horns were first brought together with small percussion as a kind of ensemble noisemaking to insure protection to disabled vehicles after dark. As punctured tires - a frequent occurrencece on forest roads - were pumped back to strength, driving mates surrounded the vehicles and banged out encouragement on ododompo finger bells and small square tamalin (from "tambourine") frame drums while honking the por por horns to scare off dangerous animals. In time, the noise of warning transformed into a music, as the drivers layered short por por horn phrases onto the standard dawuro banana-leaf bell pulse patterns of distinct ethnic and national rhythms such as kpalongo, adowa, asafo, ogeh, and agbadza. Likewise, the up and down motion of pumping the punctured tires was turned into an enthusiastic dance of accompaniment."