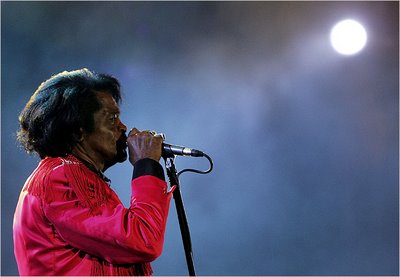 Sad news on Christmas morning: James Brown is dead. It's hard to put into words the impact JB had on 20th Century music. He nearly singlehandedly invented not one but two major musical forms, Soul and Funk, and charted the course for countless artists despite his many quirks and periods of erratic behavior. While it's been some time since The Godfather of Soul was at peak form, his most vital music remains as fresh and innovative as ever. Jon Pareles in today's New York Times concisely summarizes the career and earth-shattering power of James Brown--the first of many eulogies and rememberances that are sure to come:


James Brown, the ‘Godfather of Soul’, Dies at 73
By JON PARELES
The New York Times

James Brown, the singer, songwriter, bandleader and dancer, who indelibly transformed 20th-century music, died today at Emory Crawford Long Hospital in Atlanta, where he been admitted on Saturday for pneumonia, news services said. He was 73 years old and had lived in Beech Island, S.C., near the Georgia border.

Over a career that lasted more than 50 years, Mr. Brown called himself "the hardest working man in show business," "Mr. Dynamite," "Soul Brother No. 1," "the Minister of Super Heavy Funk" and "the Godfather of Soul," and he was all of those and more.
Mr. Brown's music was sweaty and complex, disciplined and wild, lusty and socially conscious. Beyond his dozens of hits, Mr. Brown forged an entire musical idiom that is now a foundation of pop worldwide.

"I taught them everything they know, but not everything I know," he wrote in an autobiography.

The funk he introduced in his 1965 hit, "Papa's Got a Brand New Bag," was both deeply rooted in Africa and thoroughly American. It found the percussive side of every instrument and meshed sharply syncopated patterns into kinetic polyrhythms that simply made people dance.

His innovations reverberated through the soul and rhythm-and-blues of the 1970s and the hip-hop of the next three decades. The beat of his instrumental "Funky Drummer" may well be the most widely sampled rhythm in hip-hop.

Mr. Brown's stage moves -- the spins, the quick shuffles, the knee-drops, the splits -- were imitated by performers who tried to match his stamina, from Mick Jagger to Michael Jackson, and were admired by the many more who could not.

And especially during the 1960s, Mr. Brown was a political force; his 1968 song, "Say It Loud -- I'm Black and I'm Proud," changed America's racial vocabulary.

He led a turbulent life, serving prison time as both a teenager and an adult. He was a taskmaster who fined his band members and staff for any errors, and he was an entrepreneur who in 1999 netted $30 million for bonds based on future royalties.

Mr. Brown was married four times, most recently to Tomi Rae Hynie, one of his backup singers. The couple had a child, James Jr.

Living up to his nickname, Mr. Brown performed constantly -- as much as 51 weeks a year in his prime. He was scheduled for a string of performances in the New York area this coming week, including a New Year's Eve show at B.B. King's nightclub in New York.

Mr. Brown's last public appearance was three days ago, when he joined volunteers in Atlanta for a toy giveaway he organized each Christmas.