Go Go: The Sound of DC 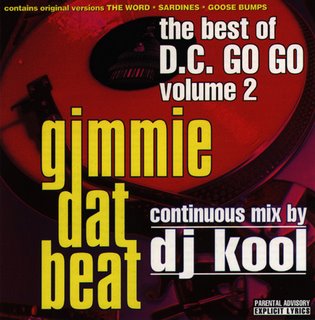 When I first came to Washington, DC from Miami, the sounds blasting out of cars made me do a double-take every time. The Doppler effect made the music sound like like Konono No. 1, but harder. And slower ... and ... American ... but, from down the street, I swear it sounded like a futuristic African dance party. I heard it here first: Go Go.

"Go-Go is a subgenre of funk music developed in and around Washington, D.C. in the mid and late 1970s. While its musical classification, influences, and origins are debated, Chuck Brown (b. 1934) is regarded as the fundamental force behind the creation of go-go music. Go-go is defined by continuous, complex, heavy rhythm arrangements focused through two motifs performed on multiple congas, tumbadoras, and rototoms, interspersed with timbale and cowbell parts, driven by heavy-footed drumming and punctuated by crowd call-and-response."

Maybe you're reading this blog from Japan or the Ukraine and you dig Fela. Does the rest of the world really KNOW that DC has its own, home-grown, funky music? Personally, I like anything with three percussionists, but if Go Go music doesn't share a ridiculous amount in common with Afro Beat, you can call me Paco ... It's urban, it's local, it's party music. AfroFunk Forum readers: Go Go IS AfroFunk ...

Here are some Go Go-related links:
An online radio station dedicated to playing Go Go 24-7: http://www.gogoradio.com
The Wikipedia entry on Go Go (quoted above): http://en.wikipedia.org/wiki/Go_go
And a couple of sites with more links to all things Go Go:
http://johnhenry22.tripod.com/gogo.html
http://www.urbanconnect.com/gogo.htm