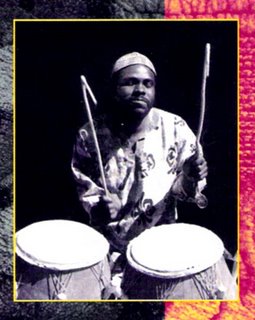 By David McDavitt
A Buddhist monk, when queried about Zen music replied, “Fool, do you not even understand your own question?” I could empathsize with this undoubtedly bemused interviewer, while reading the surprising responses to Banning Erye’s interview regarding the concept of “improvisation” in African music with Abraham Adzenyah, (Wesleyan University, Akan master drummer), Kwaku Kwaakye Obeng (Akan traditional & jazz percussionist), & Eric Charry (author of "Mande Music"). Note the varied understandings of the word, “improvisation”.
(Excerpted from Afropop.org)

AA: “...People should understand that these societies…are very conscious about their music… Without the music, there is no culture. Therefore, they don't want anybody to… make [it] your own. You add something to whatever rhythm you are playing. No. They would not allow that. They would throw you out.

But what happens is that we borrow rhythms within the same state…and that changes the feeling, a little bit… It is the same musical type, recreational musical. … Yes, you can do that... It's something that is within the system. It's just like a dictionary…

Banning: What about situation where it's recreational music, and the lead drummer is directing the dance? …. Is that improvising?

A.A.: No. He just changes the sequence; it's not an improvisation…. The lead drummer doesn't have as much freedom as people may think. Sometimes, he engages the supporting drummers in a dialogue… call and response…. If he played anything, it could be a proverb… or congratulating the singer, or asking for a drink from the person who is presiding over that occasion. That happens. You can call that an improvisation.

Banning: What would you call improvising in the traditional setting?

A.A.: In the Akan area, … when a woman gives birth to twins… you will see [women] getting together and playing an old hoe blade, and celebrating... That's spontaneous. And that is improvisation…

Kwaku Kwaakye Obeng (Akan-Ashanti)
…
KKO: …When the chief or the king hasn't arrived yet, the kids can all play around and joke around. When the king and the chief show up, everybody is in order. When the chief for the king leaves, the floor is open. I'm sure that's when improvisation happened. It could be at the marketplace too… If you look at it that way, I think improvisation is everywhere.

In Africa, yes, drummers play for dancers, but when a dancer is coming onto the stage, you can play something ... just to prep that dancer … [When the dancer] is leaving the platform, the circle… That's when the drummer can practice their own style, add their own little licks in…

Banning: …A lot of the tradition that has been passed down through the ages creeps into jazz through all these different contexts…

Look at the clavé rhythm. Everybody knows about the clavé [in Cuban music]. But if you put the clave on guitar, like Bo Diddley did, you create a new world. That has led to a whole new genre in rock-and-roll today. It was played on wood, but put that on guitar and it's the same rhythm, but we're using it in a different context. I think that's improvisation…

EC: [Improvisation is] crucial. It's built into the music. When a kora player or balafon player is playing, every piece of music has built-in variations. Some are personal, and some are passed down… It's expected that musicians will exercise these variations… A musician may just be recombining music of previous musicians, or there may be recombining in innovative ways, or they could be rejecting that and moving on to new styles…

Banning: I was always impressed with the way Malian guitarist Djelimady Tounkara could analyze what he was playing, saying what guitarist or kora player was responsible for this riff or vamp as opposed to that one…. But I guess his fluency in discussing the music that way was unusual, wasn't it?

E.C.: I agree. It's not often that a [Mande] musician would articulate to someone else where these various influences come from. Part of it is just secrecy, trying to guard your personal style, and not wanting others to grab onto it. I think you may find this with musicians all around the world. It's in their interest to build up a degree of mystique around their personal style. …

Banning: Why is improvising so prominent in Mande music, as compared with other African genres?

E.C… This goes back to their social system and their history. There is a class of musicians … known as jelis or griots. And their job, and their role in life, is to be the oral historians, musicians, and singers. So when you have a class that is patronized as such, and they spend all their time doing it, then they are apt to build a fairly sophisticated system…

In Mande music, there are more constraints that would prevent [jazz-like style evolutions] from happening… For example, with the kora, you were constrained by the tuning system. The 21 strings are tuned to different scales… One of the things that you will not find in African music is the kind of avant-garde movements… rebelling against bourgeois values …Those kinds of things don't make sense in Africa....They have a great respect for the past, and rejecting it is not part of their aesthetic.