Orchestra Baobab In The Groove


Senegal’s Orchestra Baobab is riding an ever-growing wave of recognition, following their re-forming of the band several years ago. Recent months have witnessed the publication of a number of new compilations of previously hard-to-find material from their epic 1970s run of super-herodom. I’ve been enjoying listening to the newly available recordings on the Rhapsody music subscription service and on Calabash Music, but they are widely available as well from other online and commercial sources. 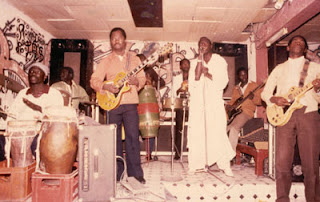 My favorite of the recent releases is “Bamba,” which includes ten previously rare 1970s tracks (click link to listen to samples or purchase). Also refreshing is “Classic Tracks,” which features alternate versions of OB gems such as “On Verra Ca,” “Sibam” and “Tante Marie.” “A Night at Club Baobab,” available for download from Calabash, highlights the intensely funky tune “Kelen ati Leen,”---showing that the band can get down with the best of them when it comes to Afrobeat. Barthelemy Attisso, Issa Cissoko and the guys can do anything!

There are also an increasing number of strong performance videos of the band on You Tube and other video sources—no doubt a reflection of OB’s series of world tours over the last couple of years, which built on the success of their Nonesuch hit CD “Specialists in All Styles,” and the re-release of the classic “Pirates Choice” recordings.

For example, check out this video gem of “On Verra Ca” recorded during a recent world tour:

You can read other posts about Orchestra Baobab on the AfroFunk Forum here and here.