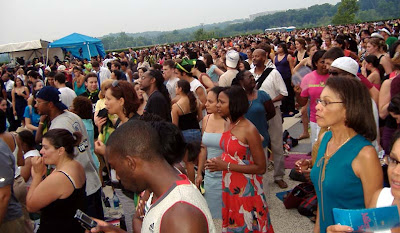 The Kennedy Center is hip. Its weekly “Millennium Stage” series brings diverse, quality music to the people free of charge. On Tuesday, June 19, 2007, the Millennium Stage featured a marathon reggae concert on the order of the beloved Jamaican “Sting,” “Rebel Salute,” and “Sunsplash” events. The Kennedy Center, in conjunction with the political “Conference on the Caribbean,” hosted the “Metro World Concert”: Plunky & Oneness (Afro-fusion band from Richmond, Virginia), the Skatalites (Jamaican Ska, Rocksteady, and Roots Rock Reggae pioneers), Jimmy Cliff (Ska, Rocksteady, Reggae star of the film, “Harder they Come”), Shaggy (US based, Jamaican-born Dancehall, “Boombastic” & “It wasn’t Me”), and Wyclef Jean (Haitian, ex-Fugees, hiphop).


Jah set the stage aptly: it was 96 degrees, and viscously humid. Surrounded by brothers & sisters from 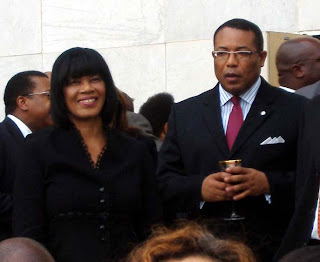 Jamaica, Haiti, Trinidad, the D.R., one could imagine they were dancing and sweating under the Caribbean moon. The event attracted all the finest people: West Indian dignitaries including Jamaican Prime Minister Portia Simpson-Miller graced the Metro World Concert with their presence. Unbelievably popular, the over-capacity crowd filled the main plaza, wrapped around the back terrace (where they listened on satellite PA systems), AND spilled into an indoor theater area where people watched live video feed!

Next came the legendary Skatalites. Though sporting only one original member (reggae drum set pioneer Lloyd Knibb), the band was true to form, demonstrating, with the calm authority of elder guild masters, the loose jazzy authentic foundations of ska, rocksteady, and roots reggae. The Skatalites’ fiery set inspired many audience members to rise & dance. Knibb’s syncopated bass drum work, upbeat hi-hat skanking, rim clicks, and clave template became the basis of reggae drumming. Interestingly, the bass player used a fretted electric bass, instead of the normal upright double bass, but approximated its round attack via technique & effects. Singer Doreen Shaffer joined the Skatalites for several numbers, and they ended with the ever popular, “Guns of Navarone,” made especially funky by the slightly overemphasized catchy bass guitar line. 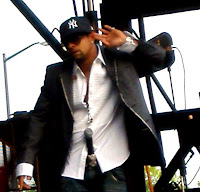 Shaggy was the next up. A crossover dancehall artist, Shaggy knows how to work the crowd, and his stage banter was as entertaining as his music. His band was hot, deftly employing both triggers/loops, and live playing into each song. He powered through his ragamuffin classics like “Boombastic,” his dancehall remake of the ska classic, “Oh Carolina,” and slack anthem, “It Wasn’t Me.” He aggressively appealed to the ladies in the audience, exposing his six pack abs, subtlety storing his SM58 mic in his waistband, repeating the mantra, “men stupid, women smart,” and recounting his manly exploits. Somehow he made it all seem charming & amusing. 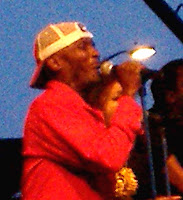 Jimmy Cliff’s appearance was a surprise (apparently a last minute addition). Honestly, I was not expecting to love Jimmy's set- I often find his performances a little too sappy, light, and outdated. I was pleasantly surprised. No performer this day had more guttural energy, vocal power (his scream-singing distorted the mic at times), nor timely sound. He sang the obligatory hits including “Wonderful World, Beautiful People,” “Many Rivers to Cross,” and “You Can Get It If You Really Want It” but also performed less-known crowd pleasers like the catchy ballad-mantra, “Save our Planet Heart.” Brilliantly, Cliff ended his set with an undeniably powerful, straight-up nyahbingi song, with only percussion accompaniment. Ras Tafari!

The show culminated with the pop hiphop stylings of Haitian immigrant Wyclef Jean. While expertly rendered by an all-star band, Jean’s set was comprised almost entirely of cover songs (for example, by Bob Marley [Redemption Song], House of Pain [Jump Around], and even an old Fugees number). Given Jean’s critically acclaimed original music, and novel approach to hiphop, this was a puzzling choice. Jean was however, well received by the crowd.