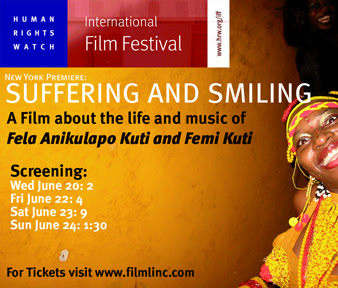 Focusing on the legendary African singer and activist Fela Anikulapo Kuti and his son Femi, Suffering and Smiling depicts the impact of their politically charged music. Following Nigeria's independence in 1960, Fela used his songs to speak out against the country's corrupt leaders. Since independence the military and political elite have enriched themselves by allowing Nigeria's oil and natural resources to be stripped by multinational corporations with little benefit to ordinary Nigerians. Fela gave voice to Nigeria's disenfranchised underclass and sang of a free and united Africa. Upon his death in 1997, Femi has continued his father's legacy. Equally passionate and charismatic, he sings about the dire situation in his country, asks why the world's most resource-rich continent has the poorest people, and struggles to maintain a vision of better days ahead for the common people of Nigeria.

Fela fans and anyone who supports human rights struggles will definitely want to check this film out. Alternative Film Guide adds a highly postive review:

Dan Ollman’s atmospheric Suffering and Smiling highlights the situation in Nigeria. Lone voices cry out against the injustices suffered by the general population while the country’s rulers maintain a culture of corruption, self-gratification, and ruthless domination of the people they purport to serve. Suffering and Smiling takes an unusual approach to the problem, as the vitality of at least one segment of Nigeria’s cultural history is expressed in the film through the words of African singer and activist Fela Anikulapo Kuti, who started singing about Nigeria’s problems following the country’s independence in 1960, his son Femi, and their family...Suffering and Smiling also shows that many Nigerians are deeply concerned with the country’s sociopolitical situation, and are committed to bringing that issue out into the open regardless of the dangers involved. The film’s music is particularly effective. With its unique lyrics (that defy "classical" musical structure), the singers and their fellow musicians manage to express their strongest views on Nigeria’s political climate with unequivocal clarity.

Any AfroFunk Forum readers out there who can share a review of the film?