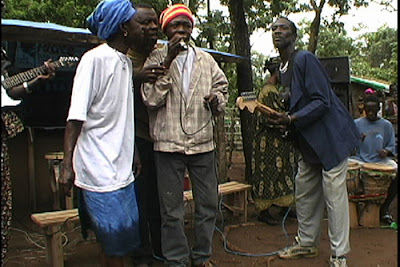 
Don't miss Sierra Leone's Refugee All-Stars, who are currently touring after the 2006 release of their inspiring first CD "Living Like a Refugee." I recently saw them in San Francisco, and the show was positively electric.


Aphrodesia, a 10+ piece Bay Area band, opened with a great set of funky music, blending Afrobeat, highlife and funk with a colorful and delightfully irreverent stage presence. Their music is politically charged, but also incredibly fun and entertaining, and everyone was dancing. I couldn't help myself and just had to pick up one of their CDs.


By the time the Refugee All-Stars hit the stage, the place was packed and ready to burst. The All-Stars, who are the subject of a remarkable documentary film airing on public television, fled Sierra Leone during the country's decade-long civil war and formed a band in a refugee camp in neighboring Guinea. They sing about the atrocities of war and the brutal violence of oppression, but their reggae-inspired music is unswervingly uplifting, transforming unspeakable horrors into gorgeous, soothing melodies. Especially in these difficult times, their simple onstage message to the crowd should not go unnoticed: "Peace to Sierra Leone, peace to Africa, peace to the United States, peace for everyone."


More on the Refugee All-Stars here.