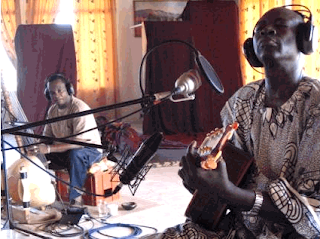 World Circuit Records has announced the release of a posthumous recording by guitar legend Ali Farka Toure, teaming up with kora master Toumani Diabate. Titled "Ali and Toumani," it's due out in February 2010.

The CD will be a follow up to their first collaboration, the 2005 Grammy Award-winning "In the Heart of the Moon." Issued just before Farka Toure's passing in 2006, it was celebrated for its deep, relaxing grooves, superb musicianship and cross-cultural vibe. Mojo magazine called it "the most beautiful music on Earth."

The Guardian on the first album:

The guitarist is from the north of Mali, one of the breakthrough world music artists of the 1980s and 1990s, whose "African blues" alerted a generation of guitar-loving rock fans to the treasures that lay outside the Anglo-American faultlines of rock'n'roll. And Diabaté is from the south - a Mandé griot schooled in a tradition that can be traced back to the 13th century.
...
We're used to world music hybrids between east and west; between electric and acoustic; and between the head and the heart. One of the distinctions of this album is that it is a hybrid of two Malian traditions that rarely meet. Though Diabaté and Touré have known and admired each other for many years, they have hardly ever played together. This gives their collaboration a special quality: it is simple yet richly detailed, spontaneous yet courteous.

Any new material from Ali Farka Toure is to be treasured, especially if it includes a collaboration with "Jimi Hendrix of the kora."

The sessions also feature Cuban bass genius Orlando "Cachaito" Lopez, who died earlier this year. Cachaito is famous around the world for his stellar performances on the Buena Vista Social Club recordings. But he also boasts decades of incredibly tasteful playing on his own solo recordings as well as on countless other seminal tracks with groups such as Orquesta Riverside and Irakere.

World Circuit has pre-released one of the tracks from the upcoming CD, "Kala Djoula," which you can listen to or purchase here. And check out this very cool video of the artists performing the song: