Ode to the “Bluesman of Africa” 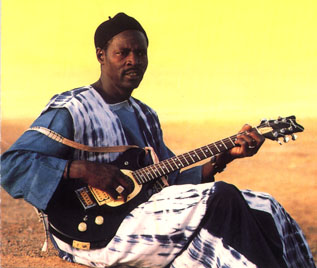 Ali Farke Toure died a couple of months ago on his farm in his hometown of Niafunke, Mali. He was a national hero and one of Africa’s most famous musicians. As expected, the eulogies were plentiful and full of praise – and rightly so. (See obituaries by BBC, The Times, The Guardian, The International Herald Tribine, The New York Times, and Afropop Worldwide.)

Ali Farka Toure was my introduction to Malian music. I bought a bunch of his CDs in late 1998, just before heading off on a two-month trip to West Africa. I was struck by how varied the CDs were – and how I much I liked each one.

Radio Mali, a reissue of songs made for Malian radio in the 1970s, is raw, poignant and powerful – and distinctly African. Talking Timbuktu, his 1994 collaboration with Ry Cooder, is polished and sophisticated, and emphasizes the close connection between African music and American blues. The self-titled Ali Farka Toure has a much more minimalist sound, focusing almost exclusively on Toure’s passionate singing and his graceful, yet intense, guitar work. But The Source is my favorite. In captivating fashion, it blends acoustic and electric, moody and upbeat, and the exotic with the familiar.

Ali Farka Toure will be sorely missed. But we can still find comfort in his music – including an upcoming new solo album, which his record label, World Circuit, says he completed just before his passing.