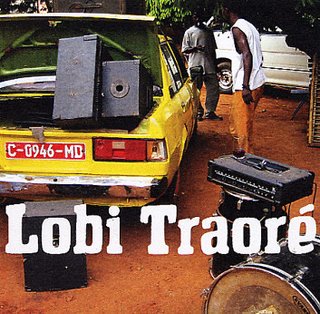 Lobi Traore’s self-titled release from 2005 is a tour de force. All Music Guide hails it as the best blues record of the year, "and it isn't even a blues record. It's hard Malian folk music gone electric." BBC describes it as "blistering" with a "manic, mystical edge," and declares: "Traore's fiery guitar style is somewhere between John Lee Hooker and Jimmy Page, and against a backdrop of frantic percussion, the whole works like a trance-inducing chant. . . . All songs are ultimately feral, almost chaotic, and weirdly funky." Indeed, the music is hot and hard-hitting – and incredibly satisfying.

The album was recorded in the open air in Bamako (Mali’s capital), with no second takes and no overdubbing. As a result, it has the energy and spontaneity of a live performance. And while it may seem rough and rugged at first, repeated listens reveal a tight and sophisticated sound. I should know – I can’t seem to get it off of my CD player!