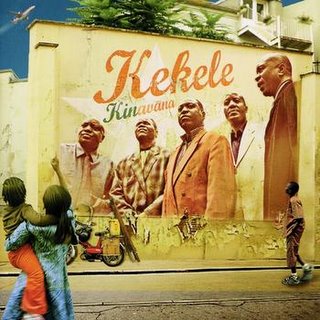 There has long been a strong and intimate connection between Cuban and Congolese music. This is powerfully illustrated by the music of Kekele, a veritable all-star group of veteran Congolese musicians devoted to "rhumba," the Congolese version of Cuban rumba music. Check out their latest release, Kinavana, for a wonderful blend of Cuban and African sensibilities.

Afropop Worldwide aptly explains the longstanding cross-Atlantic connection: "By the closing years of the Belgian Congo, the city of Leopoldville (today’s Kinshasa) was a place where city boys plucked out highlife songs on box guitars, phonographs and radios played the latest mambo and son hits from Cuba, and people from deep in the Congo’s remote, culturally rich interior came to seek opportunity. Pop bands mainly existed to entertain the white elite, and played imitations of foreign music. The Cuban music, with African (including Congolese) rhythmic ideas at its heart, was naturally familiar and attractive to local musicians and listeners. So when musicians in Leopoldville began to make electric pop music for themselves, that music provided an obvious starting point."

Kinavana brings it home full circle. The album is a sweet-sounding, heartfelt tribute to Cuban singer, songwriter and guitarist Guillermo Portables, with an unmistakable African touch. When I played it for my wife, she seemed surprised: "It’s so soothing, but it makes me want to get up and dance." Right on!