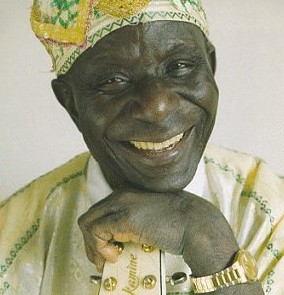 When you think of Sierra Leone, calming music might not be the first thing that comes to mind. But just listen to Dead Men Don’t Smoke Marijuana, a 1994 album from Sooliman E. Rogie, the Golden Voice of Sierra Leone. You’ll be transported to a hammock by the sea when you hear his deep, smooth voice and gentle acoustic melodies.

All Music Guide sums it up nicely: "Rogie is a master of palm wine music, which is named for a drink made from the milky white sap of Sierra Leone's palm trees, and the atmospheric, carefree feel of the tunes conjures up images of relaxing times on breezy beaches watching lush, tropical sunsets. Rogie's lilting guitar, backed only by standup bass and subtle percussion, has a rootsy folk-blues feel, while his soothing, buttery baritone caresses you like a warm Caribbean wind. With traditional African call-and-response vocals, the music comes off like a cross between the laid-back island rhythms of reggae, the back-porch vibe of rustic blues, and the spiritual feel of Ladysmith Black Mambazo, making this a sweet, stirring testament to an undeservedly little-known talent."

But Rogie was more than just a deeply talented musician. He was also a devoted teacher of African music and culture. In the U.S., where he lived for 16 years before his death in 1994, he performed at elementary and high schools across California, and received awards from Congress and the Cities of Berkeley and Oakland. Be sure to check out the soothing sounds of Sooliman E. Rogie – the godfather of modern palmwine music, who taught himself how to play guitar and who taught others about his country’s culture and its music.