Grupo Fantasma at The Black Cat in DC: Friday, Jan 9 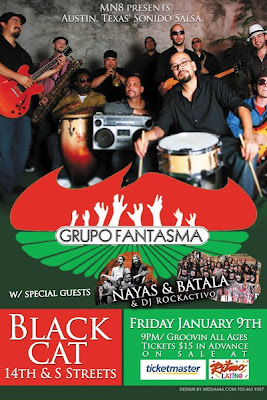 One of my favorite bands anywhere is coming to the Black Cat in Washington, DC on Friday, January 9th: the epic Grupo Fantasma. Longtime readers of The Afrofunk Forum know that we're big fans of Grupo Fantasma's devastating cumbia and salsa. Their live shows split atoms and crumble boulders with head-spinning latin funk.

The band is touring in support of their outstanding new album, Sonidos Gold. Grupo Fantasma was at the Black Cat in June with another favorite band of mine Bio Ritmo. Grupo Fantasma put on a clinic and I can promise you that this time will be no different.

Don't believe me? Then check out the rave press reviews for their recent shows, which, if anything, understate the band's impact: "one of the sickest live bands ever" (Philadelphia Weekly); "they blast off in their own funkified, genre-breaking direction" (Billboard); "this freight train of a Latin band will knock you down with the grooves" (The Village Voice); "the decade's most important artist in the Latin genre" (Allmusic Guide). Heard enough? Then get advance tickets here and don't miss the opportunity to see them in Washington, DC, or on another stop of their current tour.

Marc Powers from MN8 provides some background on the band and on the Friday show in DC:


On Friday January 9th a sonic heatwave is set to sizzle DC as Austin's
Grammy-nominated Latin funk orchestra, Grupo Fantasma, performs live at the
Black Cat. The eleven piece unit of Grupo Fantasma is best known for their
exuberant live shows and their recent association with Prince, having backed him
on numerous occasions, including his performance on the ALMA Awards in
2007.

Grupo Fantasma, who just received a Grammy Nomination for Best Latin
Alternative Album for "Sonidos Gold," is currently touring the east-coast for a
string of winter dates. Their DC show will be set off by 2 hometown acts,
namely, Batala, a 14-piece stellar band of female drummers who will be followed
by Nayas, whose Tropical Rock always heats up the crowd. And to top things off,
VIVA 900's DJ Rockactivo will keep the party going between sets with his frentic
mix of Latin jams.

Tickets are $15 and are On Sale Now at all Ticketmaster and Ritmo Latino
Outlets. Doors Open @ 9PM for this All Ages Show.