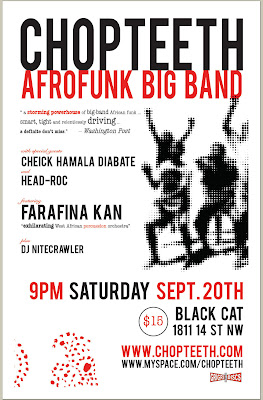 Washington, DC-based afrofunk group Chopteeth is releasing its debut CD on Saturday, September 20 at a special CD release show at DC club The Black Cat. If you're in the region, come to the party and be the first to own the new recording, which highlights original Chopteeth music on 9 tracks!

The Washington Post highlights Chopteeth’s new CD and the Saturday show with a recommendation from Post music reviewer David Malitz:


The band has become a local sensation—the dozen-plus member outfit cooks up a scintillating stew of Afrofunk, rumba, salsa, ska and funk. The group's live shows have been known to make even the most motionless of concert-watchers flail their limbs and do something that resembles dancing. There's no other band in the area with as funky and wide-reaching sound as Chopteeth... Saturday at the Black Cat, Chopteeth celebrates the release of its self-titled, debut album which does a fantastic job capturing the sweaty energy of the band's live show—not an easy task.


The evening will open with the massive West African percussion and dance orchestra Farafina Kan. Joining Chopteeth onstage will be Grammy-nominated griot Cheick Hamala Diabate, as well as the Mayor of DC hip-hop, Head-Roc. DJ Nitekrawler will spin funk rarities between sets.

You can hear samples of the new CD on Chopteeth's MySpace page! The CD will be publicly available on September 23.